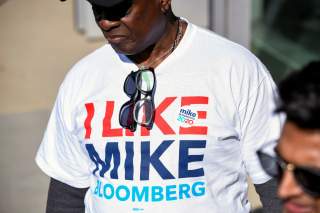 A national political poll of Democratic voters released on Monday shows that Michael Bloomberg has gained serious traction with black voters, despite his support for the controversial practice of “stop and frisk” when he was mayor of New York City.

The Quinnipiac poll, which surveyed 665 Democratic voters between Feb. 5-9, found that 22 percent of black voters support Bloomberg. That puts him second behind former Vice President Joe Biden (27 percent) and ahead of Bernie Sanders (19 percent) with black voters.

Bloomberg, who kicked off his campaign on Nov. 24, has blitzed the airwaves and social media with ads through an entirely self-funded campaign. As part of his strategy, the billionaire media magnate has avoided campaigning in early primary and caucus states like New Hampshire and Iowa, and instead aimed for a strong showing on Super Tuesday, March 3, when 14 states hold their primaries.

Bloomberg has seen a sharp increase in support across the Democratic field since his late entree to the race, but his surge with black voters is something of a surprise given his record on racially-charged issues.

As mayor of New York, Bloomberg implemented and defended so-called “stop and frisk” policies that led to the disproportionate arrests of black and Hispanic residents.

Bloomberg apologized for supporting stop and frisk during a speech at a black church in Brooklyn days before announcing his presidential bid.