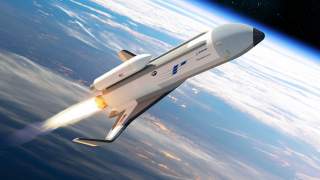 Boeing quietly has withdrawn from the U.S. military’s effort to develop a reusable spaceplane for cheaply and quickly launching small satellites into low orbit.

As Boeing was the only company developing the Experimental Spaceplane-1, its withdrawal effectively ends the program. But the Pentagon still has options for boosting lots of satellites into low orbit for not a lot of money.

Another unrelated Boeing spaceplane program is unaffected by the decision.

The Defense Advanced Research Projects Agency (DARPA) launched the XS-1 program, also known as “Phantom Express,” back in 2013. The goal was to develop a reusable rocket stage that could speed up and reduce the cost of launching satellites into low Earth orbit.

DARPA wanted the XS-1 to haul payloads of up to 5,000 pounds for less than $5 million per flight. The aircraft-like Phantom Express also was supposed to fly faster than Mach 10, land on a runway and be capable of rapid turn-around for subsequent flights.

The military aimed to conduct an intensive test of XS-1 that would involve 10 flights in 10 days.

"The long-term intent is for XS-1 technologies to be transitioned to support not only next-generation launch for government and commercial customers, but also global reach hypersonic and space-access aircraft."

DARPA in 2017 awarded Boeing a $146-million contract to build the XS-1. Boeing partnered with Aerojet Rocketdyne to develop the AR-22 engine for the new spaceplane. Aerojet Rocketdyne in 2018 demonstrated that the AR-22 was capable of a high-flight rate by performing 10 static-fire tests of the same engine in a 240-hour period.

DARPA described that test as “a significant go/no-go milestone for us.”

Two years later on Jan. 22, 2020, Boeing announced it wouldn’t finish the work. “Following a detailed review, Boeing is ending our role in the Experimental Spaceplane program immediately,” Boeing spokesman Jerry Drelling told Space News. “We will now redirect our investment from XSP to other Boeing programs that span the sea, air and space domains.”

By 2018 SpaceX routinely was launching, landing and recycling rockets for commercial and military launches. CEO Elon Musk said one of his goals for 2019 was to launch the same booster twice in 24 hours. It’s unclear whether the company achieved that goal.

SpaceX’s reusability model has driven down the cost of a launch. Clients reportedly pay between $60 million and $90 million for SpaceX to boost a 25-ton payload to low orbit, compared to around $400 million for a ride on a single-use rocket.

XS-1 aimed to achieve, in a few years’ time, what SpaceX already is doing. SpaceX steadily is winning more and more military launch contracts at the Pentagon slowly warms up to the company’s business model and methods.

Despite XS-1’s demise, at least one other Boeing spaceplane is thriving. Boeing built at least two X-37Bs for the Air Force in the mid-2000s reportedly at a cost of around a billion dollars apiece.

While it looks like a miniature version of NASA’s Space Shuttle, which retired from service in 2011, the X-37B essentially is a small, reusable and maneuverable satellite with a shorter per-mission endurance compared to single-use satellites.

The Air Force describes the X-37B as an “orbital test vehicle.” It isn’t a reusable launcher in the same way the XS-1 could have been. Each X-37B mission reportedly costs around $200 million.

The X-37B blasted off for its first mission on a United Launch Alliance Atlas rocket in April 2010. Where many satellites can function for up to a decade in orbit, the X-37B’s longest mission was its fifth. It ended in October 2019 after 780 days.

Thar X-37B carried into orbit a so-called Advanced Structurally Embedded Thermal Spreader built by the Air Force Research Laboratory.  According to the Air Force, the spreader will help to “test experimental electronics and oscillating heat pipe technologies in the long-duration space environment.”

The X-37B itself, with its longer and longer missions and reusability, is driving demand in the United States for spacecraft components that can survive for years at a time in orbit.

Meanwhile SpaceX is meeting the demand for frequent and cheap launches that the XS-1 might have met had the competition not overtaken it.