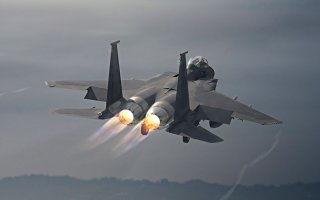 If evolving Russian and Chinese threats to 5th-generation stealth fighters are becoming much more substantial, how could a 4th-generation fighter jet such as an F-15EX survive against a great power rival?

Air defense technologies operated by Russia and China are better networked, equipped with high-speed digital computing technology, able to operate on a wider range of frequencies armed with longer-range more precise radar. Advanced air defenses are known to have some ability to detect stealth aircraft in some capacity, if not be able to directly engage or target them.

Given this circumstance, what would be the rationale for acquiring large numbers of new F-15EXs in a global threat environment such as this? Wouldn’t they be, quite possibly, rendered ineffective against the most pressing and substantial threats to U.S. air supremacy?

Without an established ability to operate amid the highest threat scenarios expected, could the now F-15EX be obsolete upon arrival?

Advances in enemy air defenses are all factors inspiring the Pentagon’s rationale for engineering stealth upgrades into the F-35 stealth fighter jet, B-2 stealth bomber and, perhaps most of all, building an entirely new generation of stealth with the B-21 strike bomber. Proponents of the F-15EX may think that an answer to this challenge may be to simply use a new 4th-generation-like aircraft for lower threat warfare scenarios.  However, there are many less expensive platforms which can succeed in a non-contested or much less contested airwar environment. So why spend the money on the F-15EX if its ability to operate against the most likely and most significant threats is not known or established?

As a 4th-generation 1980s airframe, the F-15EX is not as flat, sloped or rounded as a fifth-generation plane, and most likely not built with a mind to seams, bolts and other attachments specific to procedures needed to construct a stealth aircraft. The F-15EX also has a protruding cockpit, much like the original variants, as well as some sharp edges, likely to generate a stronger radar return signal.