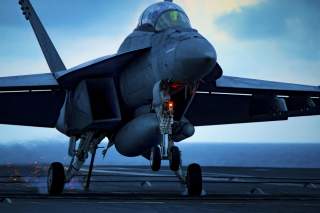 U.S. plane-maker Boeing plans trials in order to confirm that its F/A-18E/F Super Hornet fighter can operate from an aircraft carrier equipped with a skip ramp rather than catapults.

The trial could position the Super Hornet for India’s on-going competition to select a new fighter for its fleet of aircraft carriers, none of which have catapults.

“Testing plans are underway,” Thom Breckenridge, a Boeing vice president for international sales, said at a trade event in early February 2020. “We will rigorously check our aircraft on the ski jump.”

A second carrier, India’s first home-built flattop, is under construction and could commission as early as 2021. To fill out the air wing of the 40,000-ton-displacement Vikrant and an additional, planned indigenous carrier, New Delhi wants to buy 57 new naval fighters to complement the fleet’s 45 MiG-29Ks.

The Indian navy in 2018 issued a request for information for a “day-and-night-capable, all-weather, multi-role, deck-based combat aircraft which can be used for air-defense, air-to-surface operations, buddy refuelling, reconnaissance, etc. from [Indian navy] aircraft carriers.”

Boeing with the Super Hornet and French firm Dassault with its Rafale M fighter both are contenders for the multi-billion-dollar deal. Both companies must prove their jets can launch via ramp. The Super Hornet in U.S. Navy service and the Rafale M in French navy service both launch via catapult from the respective fleet’s flattops.

There’s no technical reason why the Super Hornet and Rafale M couldn’t operate from a ramp-equipped carrier. Many types launch via ramp, including the F-35B stealth fighter in British service, Su-33s in Russian navy service and J-15s in operation with the Chinese fleet.

The Indian navy in January 2020 tested an Indian-made Tejas light fighter from a ramp at a test site on land. “This successful landing is a great event in the history of Indian fighter-aircraft development program,” defense minister Rajnath Singh stated. It’s unclear whether the Indian navy plans to purchase the Tejas for front-line use.

The issue is not whether planes can launch from ramps, but whether they can launch while also carrying a useful load of fuel and weapons. Ramp-launch imparts less energy than catapult-launch does. That translates into a lighter maximum takeoff weight..

The ramp layout probably limits aircraft to a maximum launch weight of 30 tons, a former Chinese navy source revealed. At that weight, a J-15 carrier fighter cannot carry a full load of fuel and weapons, limiting it to brief missions over short distances.

There’s a related problem. Support aircraft typically weigh more than fighters do and cannot safely launch via ramp. For the Chinese, that means Shandong and Liaoning “cannot operate large, specialized support aircraft, such as an [airborne early-warning] aircraft," the DIA explained.

As Super Hornet ramp-testing begins, it’s worth noting that the Indian air force already operates Rafales in a land-based role. In buying Rafale Ms, the Indian navy would be able to share some parts and support equipment with the air force, although it’s unclear that the two branches routinely cooperate in that way.