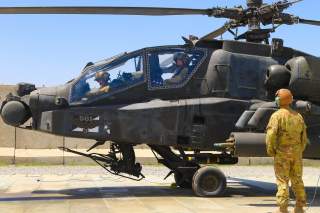 This seems a little strange.

Known as the Advanced AH-64 Block 2 Compound, the concept will serve as an interim solution in the U.S. Army Future Vertical Lift (FVL) program.

Interestingly enough, the high-tech mode doesn’t seem so high-tech, when one looks back at the AH-56 Cheyenne, which first flew in 1967.

Derived from the Army’s Advanced Aerial Fire Support System program, which ultimately ended in only ten being built.

Advanced before its time, the Cheyenne was an impressive helicopter that was limited only by the technology of the era.

While the AH-64 Apache technology partially came from the Cheyenne, the development has seemingly come full-circle. In addition to powerplant and control changes, the weapons “wings” and 30mm chain gun have also undergone changes.

With a rear-mounted pusher propeller, a large vertical fin and a new engine exhaust setup, the new Block 2 Compounds are rather futuristic.

According to Defence Blog, Boeing is dead set on keeping the Apache fleet “capable on the highly complex multi-domain battlefield of the future through 2060.”

The new Block II Compound would increase aircraft speed to 185 kts, increase payload to 5,900 pounds hover-out of ground effect (HOGE) on takeoff, and increase the range to 460 nm.