Bolsonaro or Bust: Why Biden Must Embrace Brazil 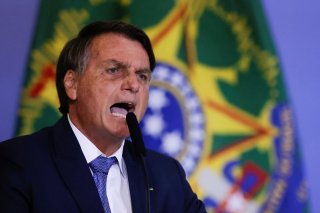 The United States’ best hope for curbing Chinese influence in South America is Brazilian President Jair Bolsonaro—and this week’s noncommittal first meeting between President Joe Biden and the Brazilian leader was a missed opportunity. Bolsonaro is six months from the end of his term with May 2022 polls predicting he will lose re-election. Brazil, the region’s biggest power, is a prime example of China’s budding relations with the continent. Having spent decades as Brazil’s top trade partner, the United States is now a distant second to China. A region that was once seen as a guaranteed ally is now at risk.

Bolsonaro, however, is a willing partner in preventing China from becoming Latin America’s “superpower of choice.” Brazil has never had such a pro-America president as Bolsonaro—and unless the United States seizes this opportunity, it never will again. Biden has six months to capitalize on the willingness of this vocal regional ally. The Biden administration should commit to signing a major economic agreement with Bolsonaro and cap the growing Chinese economic influence in South America’s largest country.

The United States has neglected its relationship with Brazil for too long. Aside from being the region’s largest democracy, Brazil comprises half of South America’s population, territory, and economic output and possesses the continent’s largest military. It has brokered security agreements between Latin American states, preserving the peace in the United States’ backyard. Democrats may point to Bolsonaro’s right-wing policies for their hesitation to work with Brasilia, but Washington’s neglect of this relationship predates the “Trump of the Tropics.” A parade of U.S. presidential administrations preached the importance of the relationship but failed to negotiate any major agreements. The United States has signed major agreements with other powerful developing countries, such as Mexico and India, but has always stalled with Brazil.

While the United States was blissfully ignorant over the past decade, China began encroaching on its neighborhood. China and Brazil have consistently extended each other the honor of state visits, as recently as 2014 and 2019. The last state visit between the United States and Brazil was in 1995. It gets worse: Brazil cancelled a scheduled state visit in 2013 when it was revealed that the U.S. National Security Agency had tapped the president’s phone. It’s no surprise that U.S. influence in Brazil has waned.

Furthermore, Brazil has become reliant on the Chinese market, sending 40 percent of its exports to China. China has kept Brazil’s agriculture industry profitable throughout the pandemic. The agriculture lobby is a powerful political force in Brasilia; over one-third of Brazil’s National Congress are members of the agribusiness caucus. If China was worried that its respectful political relationship would be unsuccessful in influencing Brazil’s government, it sealed the deal with its economic clout.

Bolsonaro presents an opportunity to reverse this trend. Previous Brazilian presidents sought neutrality in foreign policy by balancing China and the United States. Bolsonaro is the first to pick a side—and he picked us! But he is predicted to lose the October presidential election, so time is running out. His likely successor, former president Luiz Inácio Lula da Silva, has boasted about his strong relationships with both China and the United States. He will revert Brazil back to the traditional policy of balancing between Beijing and Washington, ending America’s window of opportunity.

Instead of offering snubs and insults, the Biden administration needs to strengthen economic ties with Brazil before Bolsonaro’s successor gives China the upper hand. China has been so successful in solidifying its grasp on the Brazilian economy that the United States cannot expect to expel China entirely. But it can stop Chinese influence from continuing to grow by shoring up its own economic relations with Brazil. Though Washington has talked about this for decades, there is now added urgency. If the United States wants to maintain its role as “superpower of choice” and curb Chinese influence in South America, it must act while Bolsonaro is president.

Bolsonaro undoubtedly deserves some of those insults. The United States should not ignore his record on the environment, Covid-19 pandemic, human rights, or other issues. Yet the Biden administration cannot allow one leader, whose days in power are limited, to hinder its foreign policy goals. If the United States could negotiate with its archenemy the Soviet Union during the Cold War, then it can handle Bolsonaro. The Biden administration should continue to pressure Bolsonaro on his domestic policies while working with him to strengthen economic ties.

The age of neglect must end. China has displaced U.S. economic influence in Brazil and won the support of its powerful agriculture industry. The Biden administration needs to choose: does it care more about capping Chinese influence or ignoring Bolsonaro? If it is the former, then it is time for the United States to get serious about signing a major economic agreement with Brazil.

Sarah Bufano is a senior national security consultant at Guidehouse, where she supports the U.S. Government. Her work is focused on Latin America and she has experience working in Argentina, Brazil, and Peru. She has an M.A. in Global Policy from Johns Hopkins University’s Paul H. Nitze School of Advanced International Studies (SAIS) and speaks Spanish, Portuguese, and Italian.