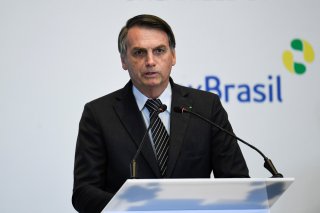 Breaking his silence after his loss to Luiz Inacio “Lula” da Silva in Brazil’s most recent election, Brazilian president Jair Bolsonaro voiced his support for his supporters’ ongoing protests against the outcome, even as his chief of staff tacitly acknowledged that he would relinquish power by the end of his term.

In a short public address, Bolsonaro thanked his supporters for their votes and efforts during his presidential campaign. Spurred on by the president’s claims of improprieties in the run-up to the election, many on the Brazilian right have protested Lula’s victory, a phenomenon that some observers have compared to former U.S. president Donald Trump’s “Stop the Steal” rallies after his electoral loss in November 2020. Bolsonaro encouraged these protests in the speech, describing them as “the result of indignation and a feeling of injustice regarding how the electoral process occurred,” but insisted they remain peaceful. Moments after Bolsonaro concluded his address, however, his chief of staff, Ciro Nogueira, announced that the president had authorized him to begin the transition process with members of Lula’s team. A justice on Brazil's supreme court later claimed that Bolsonaro had told him privately that the election was “over” and that he would not attempt to reverse the outcome.

Although Bolsonaro lost by a narrow margin, receiving roughly 49 percent of the votes to Lula’s 51 percent, the election was monitored by international observers and certified as free and fair. U.S. president Joe Biden and dozens of other world leaders have already sent congratulatory messages to Lula. Additionally, many of Brazil’s lower elected officials have reached out to the incoming president expressing interest in working together once he enters office on January 1, 2023.

As part of the post-election protests, many truck drivers in Brazil—a key constituency for Bolsonaro, who campaigned in favor of fuel subsidies—shut down the country’s roads by parking their vehicles and forming impromptu roadblocks. In Sao Paulo, the country’s richest state and a base of support for the president, the ensuing traffic jams led to significant disruptions at the city’s main airport and the cancellation of dozens of flights. The roadblocks had been cleared by early Tuesday, but traffic problems persisted for hours afterward, according to the Associated Press. Although Sao Paulo governor Rodrigo Garcia was a major supporter of Bolsonaro during his re-election campaign, he fiercely condemned the disruptions, vowing to maintain public order through force if necessary.

On Tuesday, the Brazilian Supreme Court ordered the federal highway patrol to clear the roadblocks, which it alleged had not been done in the previous days due to “omission and inertia” among high-ranking police officers. The police indicated on Tuesday evening that they had removed 358 blockades but estimated that more than 200 remained.