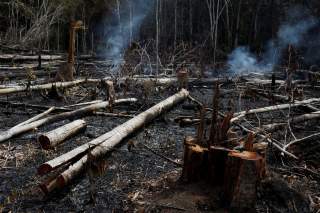 “On the question of burning in the Amazon, which in my opinion may have been initiated by NGOs because they lost money, what is the intention? To bring problems to Brazil,” Bolsonaro said on Wednesday.

In a Facebook live broadcast later that day, he added that “Everything indicates” that NGOs wanted to “set fire” to the Amazon. He then admitted that he had no evidence to back up the claims.

Bolsonaro’s statements are, of course, a lie. While it’s difficult to trace the precise cause of the nearly 75,000 fires currently burning in the Amazon, his far-right administration has empowered ranchers, loggers and farmers to clear land for their own benefit, destroying huge swathes of the rainforest in the process.

As the Huffington Post noted, after his inauguration Bolsonaro appointed a foreign minister who said that climate change was a leftist “ideology,” an environment minister who questioned whether humans contributed to climate change, and shifted oversight of indigenous reservations to the Ministry of Agriculture, which is allied with the agribusiness lobby.

The indigenous population of the Amazon, already severely at risk because of Bolsonaro’s genocidal policies, has been hardest hit by Brazil’s poor stewardship of the environment.

Armed groups have staged attacks on indigenous communities, cutting down trees, planting grass and starting fires to allow large businesses and criminal enterprises to encroach on their land.

A video went viral on Wednesday showing an Indigenous Pataxó woman near tears as she explained how land on her reservation had been set on fire to make way for cattle ranching.

Scientists are terrified that the sharp rise in forest fires and the dramatic increase in deforestation (there’s been an 84% increase since last year, and the clearing of forested land hit a new monthly record of 1,345 sq km in July) would lead to an unrecoverable “tipping point,”  after which the Amazon would lose its water-recycling capability and change from a rainforest into a savannah, severely diminishing its ability to absorb carbon.

“There are a number of tipping points which are not far away. We can’t see exactly where they are, but we know they are very close,” Philip Fearnside, a professor at Brazil’s National Institute of Amazonian Research, told the Guardian. “It means that we have to do things right away. Unfortunately that is not what is happening. There are people denying we even have a problem.”

Bolsonaro’s “strategy” of blaming NGOs for the fallout from his own ecologically disastrous policies echoes similar moves made by other authoritarians.

In 2012, after his return to the Russian Presidency, Vladimir Putin launched a crackdown on NGOs in Russia, requiring them to register as “foreign agents”. In 2014 he went on to accuse NGOs of creating dissent in Ukraine which led to the ousting of Ukrainian President Viktor Yanukovich.

“We will not accept a situation like what happened in Ukraine,” Putin said. “In many cases it was through non-governmental organizations that nationalist militants and neo-Nazi groups, which become the shock troops in the anti-constitutional coup d’etat, received funding from abroad.”

Similiarly, authoritarian President Rodrigo Duterte of the Philippines. has claimed that NGOs obstructed justice in his war on drugs, which has left thousands dead at the hands of police and paramilitary death squads. In 2017, Duterte instructed police to shoot anyone who obstructed police business, even if they included human rights or NGO workers.

“Shoot those who are part of [drug activity],” Duterte said. “If they [members of human rights organizations] are obstructing justice, you shoot them.”

This article originally appeared at Think Progress on August 22, 2019.

Luke Barnes covers politics and the far right for ThinkProgress.