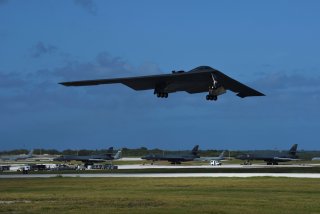 While NATO allies and other European partners continue to acquire F-35 Lightning II fighter jets, there remains a critical need for the unique and extremely valuable capabilities that bombers possess. As the U.S. Air Force recognizes this fact, long-range bombers are set to continue conducting Bomber Task Force patrols in the skies above Europe.

“Bombers give us the ability to provide some strategic ambiguity. There is a pattern of life to fighters. Bombers are recognized by our adversaries and [our adversaries] recognize that we are training from a standoff perspective,” U.S. Air Force Gen. Jeffrey Harrigian said at a recent event hosted by the Mitchell Institute for Aerospace Studies. “Standoff targeting adds a deterrent value that is hard to quantify. We get feedback as to what the impact is, which we don’t get with our fighters.”

Harrigian explained that many F-35s and other fourth-generation aircraft often perform the same routines over the course of time, something that establishes a regular “pattern of life” for adversaries to notice. This means that it can be difficult for the Air Force to remain unpredictable and present a credible deterrent. However, high-altitude bombers with long-range sensors and advanced targeting technologies can introduce unexpected threats that bolster the United States deterrence posture.

“Because of their range and reach, bombers can show up in a variety of different locations unanticipated or unannounced to create a deterrent,” retired Lt. Gen. David Deptula, Dean of The Mitchell Institute for Aerospace Studies, told the National Interest.

The goal, Harrigian added, is to “make sure our adversaries take notice.” The United States’ adversaries will have to take notice as these bomber patrols continue in unpredictable but impactful ways.