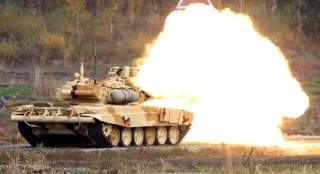 We saw the wire-guided missile bob toward the T-90, which was parked on a crest between two low-slung buildings.