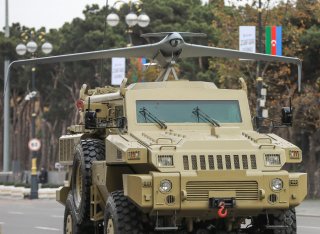 Armenian and Azerbaijani troops clashed along the border between the two countries on Monday, according to Reuters—a troubling resumption of hostilities related to the disputed Nagorno-Karabakh region, which both countries claim as their own.

Azerbaijan, which gained control over much of the region following a six-week war from September to November 2020, acknowledged that it had suffered casualties in the fighting but did not elaborate. Armenia also acknowledged the fighting but made no reference to its losses. Both sides’ statements accused the other of instigating the clashes.

“Several positions, shelters and reinforced points of the Azerbaijan armed forces … came under intense shelling from weapons of various calibers, including mortars, by units of the Armenian army,” the Azerbaijani Defense Ministry claimed in its statement, according to Reuters. “As a result, there are losses in personnel and damage to military infrastructure.”

The Azerbaijani statement speculated that Armenian forces had recently reinforced the area in order to collect intelligence on Azerbaijani positions and place landmines along the border. It insisted that it had not instigated the clashes but added that its response had been “strictly local in nature [and] aimed at military targets.”

“Intensive shooting is continuing,” the Armenian Defense Ministry claimed in its statement describing the incident, insisting that the violence had “started as a result of a large-scale provocation by the Azerbaijani side.”

“Armenia’s armed forces have launched a proportionate response,” it added.

The conflict between Azerbaijan and Armenia over the Nagorno-Karabakh region, which Armenia calls “Artsakh,” began during the late 1980s when both nations—then constituent republics within the Soviet Union—sought independence. Both republics claimed the Nagorno-Karabakh region, which is populated mainly by Armenians but which Soviet authorities placed within the Azerbaijan SSR during the early 1920s. Even as both nations remained within the collapsing Soviet Union, they began to fight a war over the region’s future alignment. Following their independence, the war continued until the signing of a truce in 1994. Armenia captured most of the disputed areas during the first war but lost them again during the most recent conflict which was characterized by Azerbaijan’s effective use of drone airpower.

Since the November 2020 ceasefire, Armenian and Azerbaijani leaders have met several times to negotiate a lasting peace treaty but have so far failed to come to an agreement.