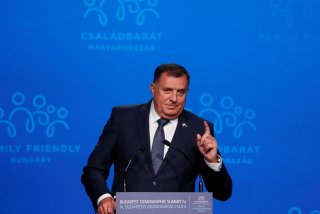 Milorad Dodik, the leader of Bosnia’s “Republika Srpska” Serb region, recently outlined his plans for the dissolution of the country and his region’s independence.

As part of his plan, Dodik called for the creation of a set of Bosnian Serb governing institutions separate from the country’s official institutions in Sarajevo. Dodik also said that he would begin recruiting a Serb army to defend the region against external threats.

Although Dodik’s message had some support among Bosnian Serbs, the country’s Croats and Bosniaks (Bosnian Muslims) have strongly pushed back against it, fearing another military conflict could begin in the nation.

Bosnia was the epicenter of conflict in the wars following the breakup of Yugoslavia in the early 1990s. Nearly one hundred thousand people were killed in fighting there over the four-year war there, which ended after a NATO bombing campaign and the signing of the U.S.-mediated Dayton Accords in 1995.

Bosnia was created in the aftermath of that conflict, carefully established as a federal system divided along ethnic lines. Roughly half of the country went to the Bosnian Serbs, while the other half was divided between Croats and Bosniaks. While the relations between the two halves have improved since the end of the war, tensions remain—including over how to remember the war’s events. Dodik’s secession plan took shape after the passage of a law banning denial of the Srebrenica genocide, an infamous 1995 massacre that many Bosnian Serbs continue to insist did not meet the criteria for a genocide.

While the two halves of the country operate with relative autonomy, they are jointly overseen by dozens of federal agencies, and a key part of Dodik’s secession plan is to challenge those institutions’ power by setting up alternatives specifically for the Republika Srpska. Earlier in the week, the Dodik-controlled Serb parliament voted to create a pharmaceutical regulatory agency, usurping power from the Bosnian federal agency tasked with such regulations. If this step is successful, then other institutions, such as an independent tax-collection agency, could follow.

In addition to opposition from Bosnia’s non-Serb inhabitants, Dodik’s actions have drawn criticism from the European Union, whose High Representative in Bosnia, Christian Schmidt, warned Dodik not to proceed with the plan.

This warning, however, does not appear to have made a difference.

Dodik, who has led the Serb region for fifteen years, came into office as a moderate reformist, advocating for a social-democratic platform. However, during his time in office, he steadily pursued a more authoritarian and ethno-nationalist line, openly advocating for Bosnian Serb independence and forging closer ties with Serbia and, in particular, Russia. In early October, Dodik met with Russian foreign minister Sergei Lavrov, presenting him with the plan and possibly receiving his approval.