Both Royal Navy Aircraft Carriers Sailed Together For First Time 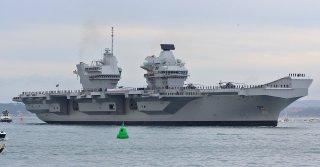 It was quite the month for the HMS Queen Elizabeth, the flagship of the Royal Navy, as the actual Queen Elizabeth II met with military personnel aboard the aircraft carrier on Saturday, ahead of its maiden operational deployment to the Philippine Sea. The ninety-five-year-old monarch stepped aboard the warship in Portsmouth, Britain, seven years after she named the vessel alongside her late husband Prince Philip, Duke of Edinburgh, who passed away last month.

The official social media account of The Royal Family (@RoyalFamily) posted a brief video of the crew giving the monarch a rousing salute, “Three Cheers for Her Majesty The Queen.” In the video, multiple Lockheed Martin F-35 Lightning II jet fighters could be seen in the hangars and on the deck of Great Britain's new 65,000-tonne warship.

HMS Queen Elizabeth is carrying eight British F-35B jets as well as an additional ten from the United States Marine Corps, along with 250 U.S. Marines that are making up part of the ship’s 1,700-strong crew on her maiden voyage. The ship will be part of a flotilla that will be joined by two destroyers, two frigates, a submarine and two support ships on its journey of 26,000 nautical miles, which is scheduled to last twenty-eight weeks, CNN reported. It also contains the largest number of Royal Navy maritime helicopters deployed in more than ten years. The group will also reportedly be joined by a U.S. Navy destroyer and a frigate from the Dutch navy.

The United Kingdom Carrier Strike Group 21 will sail through the contested South China Sea, parts of which are claimed by China and Southeast Asian countries, on its way to the Philippine Sea. The ships will make port-of-call stops in India and Singapore.

Britain’s Prime Minister Boris Johnson has suggested the deployment will bolster the UK’s soft power, including its commitment to democracy and the rule of law.

“The UK’s Carrier Strike Group sets sail to write Britain’s name in the next chapter of history—a truly global Britain that steps forward to tackle the challenges of tomorrow, working hand-in-hand with our friends to defend our shared values and uphold the rules-based international order,” UK Defense Secretary Ben Wallace said in a statement.

With two 65,000-tonne carriers in operational service, the Royal Navy will now have continuous carrier strike capability, NavalNews.com reported. One of the two vessels will always be ready to respond to global events at a short notice.

“Having previously commanded both HMS Queen Elizabeth and HMS Prince of Wales, it was hugely exciting to be present as the two met at sea for the first time,” said Commodore Steve Moorhouse, Commander UK Carrier Strike Group.

“I know that sense of pride and accomplishment is shared by thousands of others, military and civilian, who have contributed to the Royal Navy’s carrier renaissance over the past decade or more,” Commodore Moorhouse added. “The strategic significance is profound. Building one aircraft carrier is a sign of national ambition. But building two—and operating them simultaneously—is a sign of serious national intent. It means Britain has a continuous carrier strike capability, with one vessel always ready to respond to global events at short notice. Few other navies can do that. Britain is back in the front rank of maritime powers.”