Bring the Lightning: How to Solve the U.S. Navy's Aircraft Carrier Problem 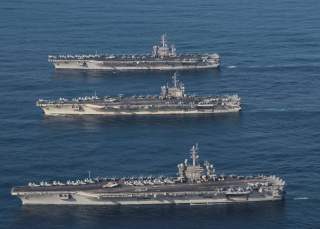 A cursory search of news media reveals a startling secret: America is having a hard time getting its aircraft carriers to sea. A nuclear-powered aircraft carrier is a large, complex piece of machinery that requires time-consuming maintenance. While the U.S. Navy attempted to keep a balanced schedule of rotating deployments and overhauls, that schedule quickly unraveled last year as the USS Truman (CVN-75) suffered major electrical problems that kept her from deploying; this prompted the USS Lincoln (CVN-72) to remain underway while postponing her own maintenance. At the same time, the USS Ford (CVN-78) has been plagued by inoperative electromagnetic catapults and elevators that have delayed her for three years.

To relieve the operational pressures on the carrier fleet, a number of analysts have suggested a temporary shift to light aircraft carriers, sometimes called Lightning Carriers. This article aims to thoroughly describe a Lightning Carrier Strike Group, it’s make up and characteristics.

While Nimitz- and Ford-class aircraft carriers are the largest warships ever built, a Lightning Carrier can be comprised of a Wasp-class LHD assault ship, transporting twenty-six F-35Bs. This number of aircraft is significantly higher than previously reported; in October 2019, the USS America (LHA-8) was photographed with thirteen F-35Bs on her flight deck. This is because the America still held MV-22s aboard. In a Lightning Carrier configuration, the amphibious assault ship could carry fifteen F-35Bs topside, with eleven more in the hangar deck (allowing for cannibalization of parts in extreme cases). The only other aircraft aboard would be two MH-60S helicopters to fill a multi-mission role, particularly search and rescue.

And while a Wasp-class ship normally carries a contingent of Marines (as part of Ground Combat Element of the MEU), ground troops would not be required, but would be replaced by additional aviation maintenance personnel.

To assist the Wasp in completing all of its aviation requirements, an America-class LHA assault ship would be needed. This ship would transport:

Many will recognize this as the Air Combat Element of the MEU. And it is. These aircraft are needed to perform a myriad of short-range missions (and take off some of the load from the Wasp); they would also assist in vertical replenishment (VERTREP) while underway.

Every aircraft carrier deploys with escorts; the Lightning Carrier is no different. This battle group of warships would have an assigned guided-missile destroyer of the Burke-class (preferably, a Flight III) to serve as the anti-air warfare captain. Of course, this destroyer would work hand-in-hand with the San Antonio and Wasp to coordinate and sequence all flights.

Also, a guided-missile cruiser would supply a large amount of offensive land attack missiles to supplement the F-35B’s attack capability; this would be a Ticonderoga-class cruiser. For protection, an attack submarine would screen against hostile surface ships and as anti-submarine defense; this is quite an expensive asset, especially since this duty could be performed by a {lower cost} frigate which the U.S. Navy does not own.

Most importantly, two replenishment oiler/supply ships would be required to complete an around-the-world deployment like the nuclear-powered carriers do. The Wasp-class ships are smaller at 40,500 tons, and therefore have less storage space for fuel, munitions, and other necessities. Thus, two supply ships would be needed to maintain the near-constant operations.

The Nimitz-class carriers transit the globe on a westward deployment; they spend about a month in each combatant command region, conducting aerial operations to support that command. The large carriers typically carry between sixty-four to ninety aircraft (in four fighter/attack squadrons) to accomplish all these requirements. A Lightning Carrier would be carrying less than three fighter/attack squadrons. So, PACOM or CENTCOM would have to adjust their requirements to accommodate a lower sortie rate. Within a thousand miles of the coastline, the USAF would provide land-based tanker, radar-early-warning, and jammer aircraft to further support Lightning Carrier operations.

(Note: There is some evidence to suggest that the F-35 can serve as its own electronic warfare platform)

Combat Commands would have to plan for fewer sorties, shorter ranges, and less loiter time while on station. However, the Lightning Carrier could overcome such constraints by sequencing aircraft via an overlapping flight schedule. The America’s additional six F-35Bs would help to ease the burden.

Large aircraft carriers make frequent port calls to friendly cities throughout their cruise. The same could occur for the Lightning Carrier Strike Group; a port visit by a U.S. Navy vessel packed full of stealthy aircraft would greatly assure our allies of U.S. commitment and capability.

What about the Threat?

The implementation of a Lightning Carrier Strike Group is the stopgap solution for the U.S. Navy’s carrier problem. The Navy’s eleven nuclear-powered carriers are showing signs of stress from years of near-constant OpTempo. The deployment of a Lightning Carrier Strike Group would buy enough time for the overhauls of the Nimitz-class carriers, allowing enough time on the deployment timeline for maintenance to catch up to the demand. Deploying a Lightning Carrier would perplex foreign navies, throwing them off kilter by exposing a never-before-seen (albeit, smaller) naval air task force composed entirely of stealth aircraft. Such a deployment would also reassure our allies, while providing time for the U.S. Navy to rebound from its maintenance backlog.

Let’s give the Marines a chance to show the world what a Lightning Carrier Strike Group can accomplish.

Samuel Arlington Page is a twenty-year veteran who served in Ranger, Cavalry, and Airborne units. He has written a novel about large-scale combat named Freedom’s Promise: The American Invasion of Mainland China, available on Amazon.com.