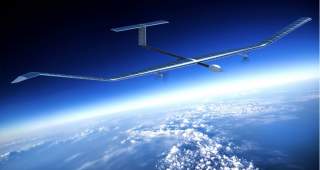 In July 2018, Airbus Defense & Space announced that its Zephyr S drone had flown for 25 days straight during testing over Arizona. The record flight came two years after the British military ordered three copies of the high-flying unmanned aerial vehicle for surveillance missions.

On Aug. 17, 2016, the British ministry of defense confirmed it would purchase a third Airbus Defense & Space Zephyr S high-altitude pseudo-satellite in addition to two previously confirmed in February 2016.

High-altitude pseudo-satellites — HAPS, for short — are super-lightweight unmanned aircraft that can linger around the stratosphere for weeks on end and act as localized satellites.

Perhaps Britain’s purchase should come as no surprise — Zephyr is British-born and -bred.

Until March 2013, the project belonged to Qinetiq, the private-sector offshoot of the British Defense Evaluation and Research Agency. But it wasn’t always a defense project.

(A version of this story first appeared in WarIsBoring back in 2016 here.)

Beginning with the 15-pound proof-of-concept Zephyr 2, the aircraft was designed not only for free flight, but also to feathered tethered to something else. At first this was the Clifton suspension bridge in Bristol in England’s southwest, but Qinetiq planned to attach its successor — Zephyr 3 — to the Qinetiq 1 balloon attempting to break the 1961 manned balloon flight altitude record of 113,740 feet.

With a 39-foot wingspan and a weight of just 33 pounds— around the same as a toddler — Zephyr 3 could fly at an altitude of 132,000 feet, more than enough to ensure that it would stay aloft even at the balloon’s record-breaking height. Its mylar-skinned carbon-composite wings carried solar panels along their length to power its five bespoke one-kilowatt motors designed at Britain’s Newcastle University.

On Sept. 3, 2003, Qinetiq 1 and Zephyr 3 sat aboard the R/V Triton, a trimaran technology demonstrator built for the Royal Navy’s Future Surface Combatant frigate concept—similar to the U.S. Navy’s Littoral Combat Ship. As the launch crew inflated the 1,250-foot envelope, a tear ripped through the skin, forcing Qinetiq to abandon the flight. Zephyr 3 might have missed its chance for a launch, but the project continued on.

Stratospheric flight has long been a goal for aircraft engineers. The best known high-altitude aircraft — Lockheed’s U-2 — can operate up to 70,000 feet or so and weather balloons typically top out before 100,000 feet.

For scientists, this region of the atmosphere is a great place to measure cosmic radiation and collect space dust. For disaster-relief missions or in remote areas without existing infrastructure, these strato-planes could also act as high-flying cellphone base stations.

The military applications are quite obvious. Aircraft such as Zephyr can relay imagery and signals intelligence to commanders on the ground at a fraction of the cost and risk of launching and operating a satellite in orbit. Additionally, satellites transit target areas twice a day — meaning non-continuous coverage.

High-altitude aircraft with long loiter times can stay on target for far longer than satellites and can redeploy over new targets with minimal hassle and forethought.

This category of aircraft is better known as “high-altitude, long-endurance” — HALE. Remotely-piloted aircraft systems advocacy group UVS International once defined HALE drones as strategic platforms with a maximum flight altitude of between 50,000 and 70,000 feet and endurance between 24 and 48 hours. With aerial refueling options and particularly solar power, however, HALE aircraft have been pushing the endurance boundaries.

In 2003, at the time of Qinetiq 1’s scrapped mission, HALE aircraft were a nascent technology — but not unheard-of.

The downing of Gary Powers’ CIA-owned U-2 in 1960 and the destruction of a U.S. military EC-121 spy plane over North Korea in 1969 spurred Cold War interest in unmanned high-altitude flight. Early efforts in the mid-1960s, such as the Lockheed D-21 and Ryan SPA 147 series of drones, provided high-speed reconnaissance and communications intelligence capabilities, but lacked the ability to linger over a target.

NASA’s environmental science mission was the primary driver in the lightweight, solar-powered approach to HALE. The AeroVironment Pathfinder used its 98.4-foot wingspan and eight motors to climb to an altitude of 67,350 feet — a record for solar aircraft. With some modifications to its solar cells and an increase in wingspan to 121 feet, the Pathfinder-Plus reached an altitude of 80,201 feet the following year.

NASA and DARPA’s Helios followed up on Pathfinder’s success. Carrying fuel cells to store the energy needed to continue flying through the night, the aircraft could stay aloft for months at a time at an altitude between 50,000 and 70,000 feet. But just months before Qinetiq 1’s failed launch in 2003, Helios broke apart and crashed into the Pacific Ocean.

America and its allies were now fully engaged in the War on Terror, boosting military requirements for long-endurance missions. In 2002, Northrop Grumman’s RQ-4 Global Hawk became the benchmark for military unmanned HALE aircraft. In 2014, a U.S. Air Force Block 40 Global Hawk flew for 34.3 hours without refueling, an unofficial record.

Global Hawk is nevertheless constrained by its fuel capacity. It’s also limited to a service ceiling of 65,000 feet, above which the lower air density can cause the turbofan engine to flame out.

Solar-powered aircraft such as the Zephyr are slower and inherently less robust than high-speed jet aircraft are, but they make up for it in altitude and endurance — as Zephyr’s Farnborough-based team set out to prove.

There was little news of Zephyr 3 after the failed balloon launch, but in February 2005 its successor, Zephyr 4, surfaced in the Woomera Prohibited Area — an unfathomably large test range sometimes called Australia’s Area 51. The British ministry of defense was tight-lipped — a good sign that the project had moved toward military applications.

Zephyr 4 was an incremental improvement over its predecessor. With some improvements to harden the design against the rigors of its high-altitude environment, the new model weighed in at 37 pounds with no change to its wingspan. Its method of deployment was the same — a helium balloon carried the Zephyr to 30,000 feet.

Zephyr 4 flew for just one hour but the test flight gave the Qinetiq team some key figures on power usage and operating ceilings that would be essential if they were to achieve overnight endurance.

After Zephyr 4, there were two Zephyr 5 prototypes — both of which could be hand-launched. Zephyr’s previous tests had shown it was far more capable of flying in the dense air towards the ground than its engineers had anticipated. Strong winds and inclement weather were still a danger to the long and gangly aircraft, but being able to fly from the ground made testing far less complicated than being lifted by a balloon.

The only differences between the two prototypes were in their power supplies and, consequently, their respective weights. Zephyr 5-2 carried non-rechargeable batteries weighing 55 pounds. Zephyr 5-1 carried both solar panels and a battery for a total weight of 68 pounds. This allowed the team to test two different weights — but only the rechargeable Zephyr 5-1 had any future as a long-endurance aircraft.

In December 2005, both Zephyr 5 aircraft flew low-altitude, launch-and-descent test flights at White Sands Missile Range in New Mexico for four and six hours, respectively. In July 2006, the aircraft returned to White Sands, where Zephyr 5-1 flew for 18 hours — seven of which were overnight — and reached 36,000 feet. The team finally had the basics down and could now concentrate on pushing the design’s capabilities further.

The Qinetiq team had lofty goals. “At present long endurance is measured in terms of hours. Ultimately we are thinking in terms of months,” Paul Davey, Zephyr’s development director, said in a July 2006 news release. “The current development program has the potential to extend Zephyr’s mission endurance to around three months, which could force a wholesale change to the way in which the industry thinks about UAV operations.”

Zephyr 6 increased the wingspan to 59 feet but managed to reduce the weight to around 66 pounds. The power system was overhauled to include paper-thick amorphous silicon solar arrays powering lithium-sulphur batteries. The improvements spoke for themselves.

By now it wasn’t just the British who were interested in Zephyr — the U.S. Department of Defense funded the project as part of the Joint Capability Technology Demonstration Program. This deal also saw Qinetiq acting as key technology partner with Boeing for DARPA’s Vulture — and later, SolarEagle — program, which sought to keep an aircraft in the air for five years.