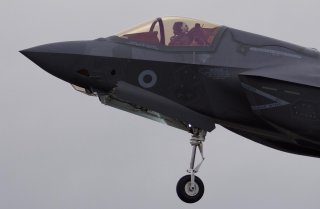 A new sense of resolve appears to have gripped British foreign policy this year. Faced with the looming realities of Brexit, the United Kingdom has proven eager to reassert its voice on the global stage. This newfound confidence has translated into desires to reassess relations with numerous countries, as part of its “Global Britain” campaign. China, for example, has come under particular scrutiny, with bilateral issues concerning COVID-19 and Huawei recently met with a barrage of hawkish retorts.

Whilst this assertive outlook has gained momentum in the corridors of power, however, recent months have shown that it has remained on the fringes of official decision-making. This was true until the Chief of the Defence Staff Sir Nick Carter’s speech in late September. Announcing the British military’s adoption of a new “Integrated Operating Concept,” the general is now spearheading an ambitious campaign to revolutionize the country’s hard power through to 2025. This has seen London openly train its sights on several key adversaries, with the doctrine described as “the most significant change in UK military thought in several generations.”

So, what makes this new concept so revolutionary? Overall, the strategy appears focused on futureproofing British capabilities against an increasingly nuanced set of threats. This was made clear in a twenty-page Ministry of Defence document detailing this new outlook. Embracing a worldview in which conflict has become less confrontational but more ubiquitous, the ambitious doctrine supports tailoring defence to today’s “inflection point between the Industrial Age and the Information Age.” In simple terms, such grandiose thinking likely spells the official end of Britain’s traditional focus on troops and tanks that has defined its engagements in recent decades. General Carter has already labelled the less mobile aspects of this approach as approaching “sunset.”

In its place, “integration” is now the word of the day in British security circles. Such a focus proposes uniting all aspects of national defence through a “digital backbone.” This would subsequently allow information to be shared rapidly between government and defence spheres. Given continuing debates regarding investment in light of the pandemic, it is clear that this bold thinking is in part motivated by desires to promote the military’s continued utility to the Johnson administration. New waves of funding will therefore focus on physical assets especially adapted to “hiding and finding” capabilities. This includes drones and systems fit for electronic warfare. Simultaneously, space has also now entered the lexicon of an armed forces community eager to adapt, with the pursuit of traditional conflict increasingly seen as “a tool of last resort.”

Whilst security experts pick over the finer points of the doctrine, it is the Integrated Operating Concept’s discussions of Russia and China that have grabbed wider headlines. Interestingly, these “authoritarian adversaries” appear to be as much responsible for the creation of Britain’s new strategy as general advancements in the field of security. For example, Carter’s recent speech stresses Beijing and Moscow’s decades-long study of the “Western way of war,” stretching back to the Gulf War. This has subsequently left the UK “exposed through our openness” and vulnerable to operations that distort traditional notions of war and peace.

Consequences of this exposure are said to include Russia’s 2014 annexation of Crimea, which is viewed as a deliberate manipulation of traditional armed response thresholds. At the same time, references have been made to the pioneering activities of China’s Strategic Support Force in the fields of space and cyberwarfare. In response, the concept has re-affirmed London’s commitments to NATO as the third “node” in its new civil-military framework. Such news will come as an especial relief to concerned allies in Europe, whose British links remain dominated by Brexit. In contrast, the strategy hopes to adapt traditional links to changing circumstances, with a “Global Britain” “allied by design” continuing to play a key role in a modernised alliance.

The coming months will therefore reveal how such ambitions will be converted into a functioning reality. Of course, the concept’s delicate balance of old and new will prove difficult to achieve overnight, with talks of abandoning traditional hardware altogether unlikely to help such matters. Such an approach could ultimately reduce the strategy to an excuse for simply playing catch up with its resourceful rivals in Moscow and Beijing. Policymakers may subsequently be tempted to embrace frenzied debate akin to that surrounding the “discovery” of the Kremlin’s now-discredited “Gerasimov Doctrine”.

As a result, British decision-making will need to walk a fine line if it is to combine its ongoing activities in the Baltics and South China Sea with the emerging “win without fighting” realities of information warfare. Given London’s continued desire to strengthen a post-Brexit “independence,” it is perhaps rather apt, then, that “the triumph of the narrative” has been identified as a key cornerstone of this emerging “Information Age.” Certainly, if the Integrated Operating Concept is to be believed, the success of such political ambitions relies now more than ever on a nuanced approach to military affairs.

Niall M. Gray is a master’s student of Central and East European, Russian and Eurasian Studies at the University of Glasgow.