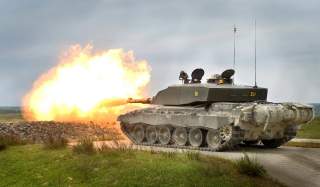 The British Army recently revealed a demonstrator for a new version of its Challenger 2 main battle tank -- one with extra equipment and weapons for operations in cities.

But don’t hold your breath waiting for the army to field scores of the so-called “Streetfighter II” model of the venerable tank. The service barely can afford other upgrades to the basic version of the same tank, much less transform it into a specialist urban combatant.

The War Zone was among the first publications to report on the concept vehicle.

The British Army’s Royal Tank Regiment showed off the Streetfighter II concept vehicle during an exercise at Copehill Down in January 2020. The new version of the Challenger 2 includes an Israeli-made “distributed vision system” that adds cameras to the tank’s hull so the crew can see all around it without exposing themselves.

The Streetfighter II also packs a dozer blade for clearing roadblocks plus a launcher on its turret for Brimstone anti-tank missiles.

"One of the primary goals of Streetfighter is to identify capability gaps between ourselves and potential enemies and then to recommend technical solutions for those areas of possible tactic overmatch," a member of the Royal Tank Regiment, identified only as “Captain Quant,” said in an official video. "These are in areas like lethality, survivability, situational awareness."

While Streetfighter II lacks some of the enhancements other armies favor for tanks in urban environments such as rocket-stopping active-defense gear, British tankers surely would welcome the model’s improvements.

Too bad they’re unlikely to see the updates in meaningful numbers any time soon. The British Army simply can’t afford a new version of the Challenger 2. Indeed, the army is planning a separate set of upgrades for just 148 of the 227 Challenger 2 tanks.

The Ministry of Defense in 2021 plans to award a contract for the Challenger 2’s first major update in years. “Rheinmetall has offered to swap the Challenger’s 120-millimeter rifled gun for a smoothbore weapon, while the BAE-led partnership Team Challenger 2 offered to fit an active protection system,” Defense News reported.

“The army would probably like both, but given the dire state of the defense budget, affording even one of those options is problematic,” Defense News added.

The army would use the 79 tanks it retires as a source of spare parts, The Times reported. “It is possible that some could be patched up for deployment in an emergency.”

The proposed cut to the armor force -- the British Army’s second major reduction in tanks since 2010 -- would make the U.K. ground-combat branch the 56th biggest tank-operator, The Times estimated.

As recently as 2010 the British Army possessed 316 of the 408 Challenger 2 tanks it originally acquired starting in the late 1990s. Deep cuts across the U.K. armed forces starting that same year eliminated not only 89 tanks, but also two aircraft carriers, two amphibious ships, four frigates, an army brigade, a third of the army’s artillery and all of the air force's Harrier jump jets and maritime patrol planes. Uniformed manpower dropped by 30,000.

Instead, funding stabilized at around $55 billion annually. In 2017 and 2018, the government allocated the armed forces an extra $2 billion, combined, above planned spending levels, enough to employ 196,000 active and reserve sailors, soldiers, airmen and civilian personnel.

The modest spending boost gave planners some hope that budgetary shortfalls -- a perennial problem for the U.K. armed forces -- finally were coming to an end. Around the same time, London proposed to reconfigure its military for major conflict.

Under the new strategic construct, the army would have two tank brigades, two mechanized brigades, six infantry brigades, a parachute brigade and 15 helicopter and drone squadrons, each with around 15 aircraft. If the cuts The Times reported take effect, the two tank brigades would share fewer than 150 tanks.

With other upgrades years away and overall armor holdings likely to shrink, it’s wishful thinking to expect the British Army to invest in a special version of the Challenger 2 for city battles.