British Army to Phase out AS-90s Artillery: What’s Next? 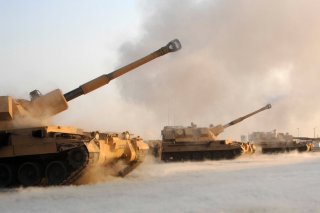 The British Army will soon begin the phasing out of its AS-90 Vickers artillery, which is nearing the 30-year mark. With shifting types of warfare and important evolutions in technology, the replacement will require much scrutiny from the general staff. But if replacing Britain’s howitzers will necessarily be a complex and time-consuming task, it is also an opportunity to reinvigorate the armed forces, amidst budgetary cutbacks.

The Vickers 155 gun was one of Britain’s most recent engineering (and business) feats. A solo endeavour, it was launched by Vickers on the assumption that competing international programs would eventually fail—which they did. As a result, when the time came for Britain to acquire new artillery, Vickers was able to produce their entrepreneurial baby, while all competitors had only drawings and sketches of theirs. Developed in the 1980s and fielded in the 1990s, the AS-90 has proven an excellent gun. Fitted with 155-millimeter tubes, the howitzers have aged rather gracefully, with several successive upgrades, namely in admissible types of ammunition and digitization—two fields where massive progress was made in recent decades. So, because the platforms are nearing retirement age, and because there is only so much upgrading which can be done on one single vehicle, the Ministry of Defence is starting to work on the next phase. Defence reporter David Axe writes:

“The British Army doesn’t have enough artillery to win in battle with Russian forces, a U.K. think tank claimed. And the artillery the army does have lacks range and mobility [...] As recently as the 1990s the British Army possessed world-class artillery in sufficient numbers. But owing to decades of budget-driven cutbacks, the army in 2019 operates only older artillery systems, and too few of them.”

So, what is at stake?

Despite being an excellent gun, the Vickers AS-90 was a victim of its time. As is sometimes the case (the same misfortune happened to our French neighbours with the Leclerc tank), the gap between the development phase and the production phase negatively impacted the operational relevance of the cannon. Developed during the 1980s, during the Cold War, it rolled out of factories only to find that the enemy for which it had been built and designed, had disappeared. NATO plans prepared for vast conventional battles against Soviet armour and infantry, a tactical configuration for which the AS-90 would have been ideal. Defence reporter Harold Hutchison writes about how the AS-90 missed its stride:

“The system entered service in 1993, too late for Operation Desert Storm. Cutbacks after the fall of the Soviet Union meant that it also did not see a lengthy production run. It has a top speed of 34 miles per hour, which allows it to keep up with the Challenger 2, Britain's main battle tank, which has a top speed of 37 miles per hour. This 50-ton vehicle saw action during Operation Iraqi Freedom and in NATO peacekeeping missions in the Balkans, where it provided fire support. An improved version, the AS-90 "Braveheart," was expected to feature a 33% longer barrel, but was cancelled after issues with the propellant emerged.”

Indeed, the AS-90 would have performed gloriously in different times. In its own, though, it was ill-adapted, on several grounds. Its crew counts five men, many positions to fill when all modern armies downsize. Its armour makes it extremely heavy, and therefore nearly impossible to deploy via air transport. This entails that its deployment will necessarily take weeks or months and is subjected to international authorizations. Indeed, in some war theatres which are landlocked, moving heavy equipment to the fighting grounds can prove diplomatically complex. Finally, it is slow, also for weight. While this would not have been a problem facing equally slow Warsaw-pact units, it proves a problem when fighting modern-day ultra-mobile insurgent units. So, what’s next?

Many options are on the table. Much progress has been made in recent years, regarding ammunition, ballistics, propulsion, etc. Range, accuracy, mobility, and performance have basically all increased substantially. The first option would be to turn to the American ally and ask permission to purchase the Paladin. While the machine is indeed outstanding, this would amount to acquiring a newer, better AS-90. As stated above, the quality of the AS-90 was never an issue, only its design. Should we acquire the Paladin or an equivalent, we would once again be stumped for rapid deployment, etc. These types of howitzers are therefore best adapted for nations exclusively involved in border protection, with no expeditionary activity whatsoever. In addition, because these designs include armour, they also strain budgets. Given our own available finances in the military fields, one could wonder how many (or how few) Paladins we could buy with our meagre budgets. Major General Jagatbir Sing writes:

“Maintaining an Army is prohibitively costly, hence, its size and structure though based on a countries threat perception is also dictated to by the strength of the nation’s economy. The UK is currently facing a dilemma regarding the future of its combat strength, and capability, although this situation may not have come to a head if it’s existing fleet had been replaced and upgraded over the years.”

For once, the French may have the solution with the Caesar artillery truck. It boasts the same ballistic performance as other modern howitzers, but at a fraction of the cost. It is also the only unit in this modern category to be combat proven, after its successful deployment in the Serval/Barkhane operation. In military affairs, large quantities of reliable guns often surpass small numbers of high-tech units. But, if it is equally powerful to traditional armoured platforms, what of its protection, you may ask? Truck-mounted artillery units, such as the Caesar, borrow a defence concept from helicopters and other light units, where armoured protection is replaced with mobility: if the unit is able to fire and quickly disappear, it no longer has any use for armour and can safely serve its purpose on the field. Deployed in Mali, the Caesar showed excellent results. This type of cannon would additionally preserve links with Europe and NATO, despite recent turmoil. Interoperability with French forces, with whom we often deploy with, would be an ace up our sleeves, and rapidly deployable artillery would be a huge asset to bring to the table of NATO.

British military budgets are downsized and will stay so in the foreseeable future. So, how can we buy new artillery, which is sufficiently affordable for us not to need to further reduce our numbers, and sufficiently powerful to keep the Royal Army on the map? If we make the wrong choice, we will either be impossible to deploy overseas, or we will get there but with insignificant forces. Twenty years ago, this would have amounted to a difficult conundrum. But thanks to recent technological developments, we could have an ace up our British sleeve.