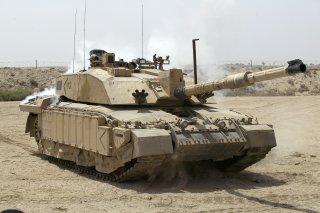 The British Army is planning to upgrade just 148 of its 227 Challenger 2 tanks, according to The Times.

The proposed cut to the armored force -- the British Army’s second major reduction in tanks since 2010 -- would make the U.K. ground-combat branch the 56th biggest tank-operator, The Times estimated.

Cutting tanks could jeopardize London’s plan to revamp its armed forces for high-tech combat with a major world power such as Russia.

As recently as 2010 the British Army possessed 316 of the 408 Challenger 2 tanks it originally acquired starting in the late 1990s.

Deep cuts across the U.K. armed forces in 2010 eliminated not only 89 tanks, but also two aircraft carriers, two amphibious ships, four frigates, an army brigade, a third of the army’s artillery and all of the air force's Harrier jump jets and maritime patrol planes. Uniformed manpower dropped by 30,000.

Instead, funding stabilized at around $55 billion annually. In 2017 and 2018, the government allocated the armed forces an extra $2 billion, combined, above planned spending levels, enough to employ 196,000 active and reserve sailors, soldiers, airmen and civilian personnel.

The modest spending boost gave planners some hope that budgetary shortfalls -- a perennial problem for the U.K. armed forces -- finally were coming to an end. Around the same time, London proposed to reconfigure its military for major conflict.

The army would have two tank brigades, two mechanized brigades, six infantry brigades, a parachute brigade and 15 helicopter and drone squadrons, each with around 15 aircraft. If the cuts The Times reported take effect, the two tank brigades would share just 148 tanks.

The U.S. Army’s own tank brigades are much larger with around 90 M-1 tanks apiece.

The Challenger 2s have suffered from a lack of upgrades. A new urban camouflage scheme that the Royal Tank Regiment in 2017 applied to a few Challenger 2s belied the vehicles’ unupgraded guns, armor and engines.

“The army would probably like both, but given the dire state of the defense budget, affording even one of those options is problematic,” Defense News added.

The army would use the 79 tanks it retires as a source of spare parts, The Times reported. “It is possible that some could be patched up for deployment in an emergency.”