British Defense Secretary Travels to Moscow for Talks Over Ukraine 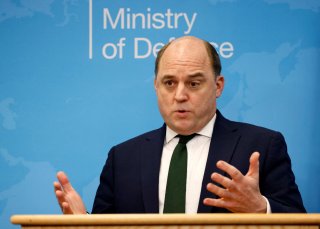 British defense minister Ben Wallace is due to travel to Moscow to urge de-escalation amid the looming threat of Russian military action against Ukraine.

Wallace, who met with his Polish counterpart Mariusz Blaszczak on February 7 to discuss the deteriorating security situation in Eastern Europe, had earlier accepted Moscow’s invitation for talks with Russian defense minister Sergei Shoigu. According to Russian state news outlet RIA Novosti, that meeting is slated for February 11. Although Wallace previously told the British Parliament he is “not optimistic” about the prospects for a diplomatic breakthrough, he is expected to try to dissuade Moscow from initiating a full-scale invasion of Ukraine.

Wallace’s visit will come shortly on the heels of a separate trip by British foreign secretary Liz Truss, who is slated to meet with Russian foreign minister Sergei Shoigu on February 10. A British Foreign Ministry press release said Truss will “fly to Moscow today to urge the Kremlin to de-escalate and desist its aggression against Ukraine.” The statement added that Truss will “push for Russia to abide by the international agreements it has already signed up to—including the OSCE Helsinki Final Act, Minsk Protocols, and the Budapest memorandum, which ensures the independence and sovereignty of Ukraine is respected.” According to the statement, Truss is expected to stress the use of “international sanctions” as a punitive response to Russian military aggression against Ukraine. Anrei Kelin, Russia’s ambassador to London, warned Truss and Kelin earlier this week to abstain from “threatening” Russia with sanctions. “If they’re coming to Russia to threaten us again with sanctions then it is fairly pointless: we read everything, see everything, know and hear. In this case, the dialogue and conversation in Moscow will be probably fairly short,” he said.

Britain has been at the spear tip of Western efforts to deter Russia from potentially attacking its western neighbor. Late last month, Kiev received a shipment of British anti-tank weapon systems along with an elite “training contingent” of thirty British personnel.

Wallace said on Monday that the United Kingdom is sending an additional 350 troops to Poland, joining the 100 British soldiers already deployed there. London has characterized the decision as a “bilateral deployment,” suggesting that it is not part of a formal NATO effort.

Ukrainian foreign minister Dmytro Kuleba announced last week that Kiev, Warsaw, and London are in talks over a new “format for cooperation,” though the details surrounding this arrangement remain unclear.