Britons Value Compassion Over Economic Prosperity, According to New Polling 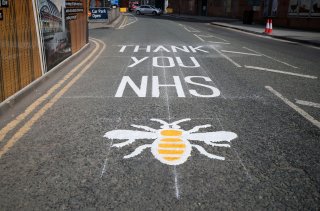 These are uncertain, anxious and unnerving times. The COVID-19 pandemic is affecting every one of us in some way, from physical and mental health to income, from routine and way of life to concern for others. There are, though, causes for hope and optimism in amongst the unease and discomfort. New polling shows the British public values the life and health of the nation’s older population over longer-term economic prosperity.

The UK government, like so many others, has had to weigh these issues against each other in its attempts to slow the spread of COVID-19. Difficult decisions have been taken in the interests of protecting public health that will inevitably hurt the economy. Businesses have been forced to close and people told to stay at home. Companies are placing staff on furlough leave in far greater numbers than the government first predicted, and yet these results suggest that the public is on board with an approach that focuses on keeping people alive rather than keeping businesses running.

Among 2,093 adults, we found that 55% agreed that the health of today’s older generations is more important than the long-term economic prosperity of future generations, and only 8% disagreed.

Respondents also said they valued “being compassionate” as a trait in others (68%) and in leaders and senior politicians (44%) above other character qualities, such as being reflective, courageous, resilient, or wise. This is not a million miles away from other research showing that junior and established professionals value honesty, fairness and kindness in the workplace. Such moral virtues enable us to act well in situations that demand ethical responses, none more so than the crisis that currently envelopes us. The crisis is real, and the situation stark.

The poll results reflect that people are consumed by the immediacy and urgency of the threat of COVID-19, and are finding it difficult to consider more abstract concepts such as future economic prosperity or when any semblance of “normality” will return.

Respondents also place public services and being aware of those around us in high regard; “being of service to others” (42%) and “having community awareness” (40%) were also character qualities that we value in one another at this time of national and international crisis.

It is understandable that compassion is of the utmost value to us at the moment. The uniqueness of this current crisis has challenged everyone to respond in some way, be it ethically, socially, selfishly, or just by living differently. Over the past few weeks, we’ve seen examples of people behaving in ways that has both disappointed and inspired.

We seem to have come through an initial self-preservation response to the crisis, manifesting itself in long lines at supermarkets, with trolleys piled high with more goods than we need. More recently, we are now seeing and sharing scenes of people coming out of their homes to show their gratitude to key workers – which will surely be one of the enduring symbols of our shared compassion.

In the midst of such a unique and precarious crisis, the poll results reflect a human instinct to care for each another and ourselves.

That said, the findings show that there are differences between generations. While 58% of those aged 55 agreed that caring for lives was more important than economic prosperity, the figure dropped to 49% among those aged 34 and under.

Again, there were generational differences in how respondents valued other people, with younger people aged under 35 valuing compassion in others less (62%) than those aged over 55 (75%). Younger people also valued these traits slightly less in leaders and senior politicians than older people. So, while we are showing ourselves to be a nation that values compassion in this time of crisis, generally, there are degrees of compassion that differ by generation.

Asking such a potentially divisive question about short-term care for lives versus longer-term economic prosperity was designed to make respondents give a “false choice”. If we could protect both, then we would – but we can’t. While support for the short-term reality of protecting life over the more abstract notion of future economic prosperity is not a particularly surprising finding, the degree to which the public favour it is heartwarming.

The findings, overall, reflect the importance of recognising positive qualities in people around us, as well as the importance of character to our own well-being. We value the judgement and wisdom of our leaders, but recognise, at all ages, the need for care and compassion towards one another at this time of unprecedented crisis.

James Arthur, Director of the Jubilee Centre for Character and Virtues, University of Birmingham