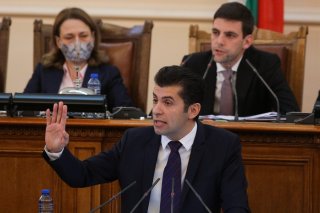 A razor-thin majority of lawmakers in Bulgaria’s parliament voted to oust Prime Minister Kiril Petkov from power on Wednesday, citing concerns over a rapidly rising inflation rate and a simmering political crisis largely brought about by the Russian invasion of Ukraine in late February.

The no-confidence vote against Petkov’s government passed in the parliament with 123 votes in favor and 116 opposed. The prime minister’s downfall came after one of the parties in his four-party coalition, the socially conservative ITN party, left the alliance over budgetary concerns and differences in foreign policy, particularly with regard to whether Bulgaria should allow neighboring North Macedonia to enter the European Union (EU).

A Harvard-trained economist and businessman, Petkov sought to strongly align Bulgaria with the EU and NATO during his tenure. After Russia’s invasion of Ukraine, Petkov condemned Russian leader Vladimir Putin unequivocally and joined the EU’s sanctions campaign against the Kremlin, although Bulgaria has longstanding ties with Russia and many Bulgarians have historically held pro-Russian views.

Petkov also committed Bulgaria to repair Ukrainian weaponry damaged during the conflict, although his government declined to supply any new arms to Kyiv. In response to Bulgaria’s participation in the sanctions and its refusal to pay for Russian natural gas in rubles rather than euros, Russian gas giant Gazprom cut off Bulgaria’s supply of Russian gas in late April, leading to price increases and a scramble to find alternative sources of energy.

Petkov dismissed the significance of the vote in remarks after it had concluded, describing it as “one small step in a very long way.”

“What they [opposition lawmakers] fail to understand is that this is not the way to win the Bulgarian people,” the prime minister added, predicting that his party would retain the majority if new elections were held. To preempt a vote, Petkov-allied officials have reached out to members of the defecting ITN party, urging them to re-defect from their party and return to the former ruling coalition. So far, six lawmakers have agreed to do so, although this still leaves Petkov short of a majority.

According to the procedure laid out in the Bulgarian constitution, Petkov will remain prime minister in a caretaker role until a new coalition can elect another prime minister, or he can reclaim the majority. If neither of these outcomes occurs, new elections are held and can be repeated if necessary if a new parliamentary session fails to resolve the deadlock. New elections, if held, would be Bulgaria’s fourth since April 2021.

Observers have predicted that if Petkov is not re-elected, his successor is likely to maintain a more neutral stance on the Russia-Ukraine conflict.