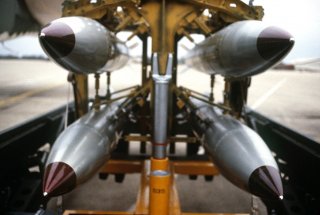 Low-yield nuclear attack, earth-penetrating strikes, above surface detonation, and bunker-buster explosions are all now woven into a single nuclear bomb for the U.S. Air Force. Meet the new B61-12 weapon.

The B61-12 is a modified nuclear weapon that builds upon and integrates more than fifty years of technology and development. It has been a multi-year modernization effort to engineer a single bomb variant able to perform a range of otherwise separated nuclear attack functions.

Historically, different variants of the weapon were needed for specific missions and blast effects. The B61-12 Life Extension Program has successfully completed its first production unit, according to the Department of Energy’s National Nuclear Security Administration (NNSA).  The B61-12 combines the Mod 3, 4, 7, and 11 into a single munition.

“The B61-12 will replace the B61-3, 4, and 7. The B61-12 LEP (Life Extension Program) refurbishes, reuses, or replaces all of the bomb’s nuclear or non-nuclear components to extend the service life by at least 20 years,” a statement from the National Nuclear Security Administration (NNSA) says.

The new variant, based upon a bomb that first emerged in 1968, also reportedly increases safety and reliability resulting from more than nine years of collaborative efforts between the U.S. Air Force and the NNSA.

A consolidated and much-improved weapon, which will drop from the Northrup Grumman B-2 Spirit Bomber and Lockheed Martin F-35A Lightning II stealth fighter, will enable easy target, mission, and blast-effects adjustments for pilots and bomb crews responding to new incoming intelligence information. Also, by virtue of multiple bombs consolidating into one, a platform such as the B-2 will be able to deploy with a much greater ordnance load and therefore operate with greater lethality, operational endurance, and a much-improved mission attack envelope.

Scientists explain that the B61 Mod 12 is engineered with a special “Tail Subassembly” to give the bomb increased accuracy, giving a new level of precision targeting using Inertial Navigation Systems.

“With this program, we’re delivering a system to the Department of Defense that improves accuracy and reduces yield with no change in military characteristics, while also improving safety, security, and reliability,”  Jill Hruby, Department of Energy Under Secretary for Nuclear Security and NNSA Administrator, said in the statement. “The work on the B61-12 will also ensure the warhead can be air-delivered on both current and future platforms to meet Department of Defense requirements.”

A low-yield variant gives commanders the possible ability to deter a potentially more limited or tactical nuclear strike, and an area-detonation above ground is able to exponentially increase the radius of destruction caused by a nuclear explosion. Bunker-buster or earth-penetrating nuclear weapons can both reach otherwise inaccessible targets and increase precision by virtue of limiting the blast radius within a more confined area underground. There might be scenarios where a commander might wish to fully destroy an underground facility while leaving nearby above-ground structures intact.