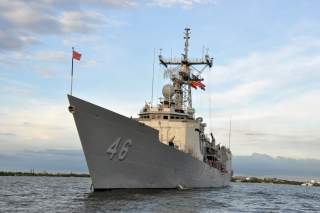 When you buy a $20,000 sedan, you expect to get a manufacturer’s warranty that promises to fix all defects without the customer paying a dime.

But not when it’s a billion-dollar frigate. The U.S. Navy’s new FFG(X) frigate will not come with a warranty. Instead, each ship will come with a “guaranty,” in which the shipbuilder pledges to correct defects—though only up to a certain dollar value, and with the government paying for part of the repairs. A new Government Accountability Office report describes this arrangement:

Each frigate will have a guaranty period that commences at ship delivery and is expected to end 18 months after delivery,” according to the GAO. “Navy officials stated the guaranty is intended to formalize a period of responsibility during which the shipbuilder must correct defects, with the cost to the government and the contractor based on the contract terms (cost shareline and price ceiling) associated with the ship. During the guaranty period, the shipbuilder would be required to correct all defects for which it is responsible, with proposals required to include a minimum limitation of liability of $5 million per ship. Once the total cost to correct identified defects reaches $5 million, the government would pay the full cost to correct any additional guaranty period defects.

That’s better than previous Navy shipbuilding projects such as the LPD 25 amphibious dock, in which the guaranty had only a $1 million limit. But that doesn’t necessarily make the FFG(X) guaranty a good deal for the government.

GAO has previously found that past Navy and Coast Guard guaranty contracts do not improve cost or quality. However, the Coast Guard has benefitted when it pays up front for a stricter warranty on ships such as Offshore Patrol Cutter, which is about the same size as the FFG(X). “The Coast Guard pays a set amount for these warranties, and in return, the shipbuilder must fix all applicable defects identified within the agreed-upon time period regardless of cost,” GAO notes.

The FFG(X) will be the Navy’s first frigates since the Cold War-era Oliver Hazard Perry-class vessels were retired in 2015. The Navy has yet to choose a final design from several foreign and domestic offerings (the final Request for Proposal was released in June), but the new frigate will probably be 6,000- to 7,000-ton ships armed with thirty-two Mark 41 Vertical Launch System (VLS) tubes armed with SM-2 and Evolved SeaSparrow anti-aircraft missiles or anti-submarine weapons. The ships will also be armed with additional launchers for up to sixteen Naval Strike Missile anti-ship weapons.

The FFG(X) is intended to be a smaller vessel suitable for missions such as anti-submarine warfare and convoy defense, thus freeing up larger and more expensive destroyers for other tasks. Congressional analysts have questioned some aspects of the FFG(X) concept, such as whether it should be armed with more VLS tubes.

Looming behind the FFG(X) project is the ill-fated Littoral Combat Ship, another smaller vessel that has been plagued by performance and cost problems. Better procurement methods, such as warranties rather than guarantees, would “help ensure that the FFG(X) program does not face some of the same cost, schedule, and performance shortfalls that have been faced by the LCS program,” GAO concludes.