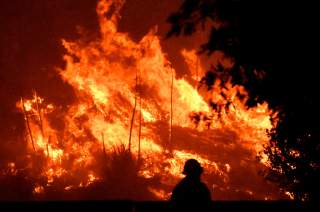 Private waste disposal companies in California are rethinking their fire emergency practices after a burning pile of trash turned into a vicious wildfire that ravaged a mobile home community, killing two people.

There are no California state laws that regulate how garbage men dispose of burning loads in their trucks, which leaves it to the independent waste disposal companies to decide the procedures employed for those occurrences, The Associated Press reported Thursday.

The waste disposal industry has long recommended that drivers swiftly unload their trucks in the event of a fire in order to protect the driver as well as prevent damage to the trucks, which cost as much as $300,000, according to the AP.

A fire on a garbage truck sparked the Sandalwood Fire to erupt in Calimesa, California, on Oct. 10, which reportedly killed two people. The driver, an employee of CR&R Environmental Services, reportedly dumped his truck’s load on the side of the road after detecting that there was a fire.

Executives in the industry are considering alternative methods to handle these dangerous situations amid a heightened threat of wildfires brought on by California’s arid and windy climate.

“We’re in the beginning of a conversation within the industry,” David Biderman, executive director of the 10,000-member Solid Waste Association of North America, said, according to the AP.

“What I suspect is that on days when there’s inclement weather, including high winds, we need our drivers to be particularly mindful of that when they dump the load,” he continued.

The danger of garbage trucks catching fire is escalated not only by the hot climate but also by the abundance of disposed lithium batteries and other flammable waste products, according to the AP.

“What is good practice or regulation for California, Arizona, for Nevada, is going to be different from what is good practice for Vermont or New Hampshire, where we’re under a blanket of snow six months of the year,” he said, according to the news agency.

The Sandalwood Fire reportedly destroyed 74 structures in Calimesa, scorching through 1,100 acres as it grew to its peak size as big as New York City’s Central Park, according to The New York Times.

The fire was 100% contained as of Oct. 14, according to The Press-Enterprise.

Another wildfire in California is forcing hundreds out of their homes — the state has seen a fivefold increase in burned areas since 1972, due in part to the climate crisis pic.twitter.com/RHol0x1UQN

Hundreds of northern California residents were forced to flee their homes early Thursday due to the most recent rapidly growing wildfire in the region. The cause of the fire is still under investigation, but strong, dry winds have quickly bolstered the blaze’s severity, the AP reported. No injuries have yet been reported.