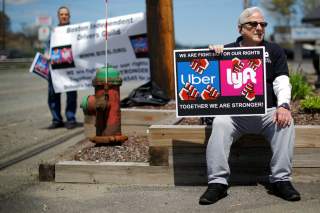 The California State Senate passed a bill 29-11 Tuesday that would recognize rideshare and delivery drivers as employees rather than independent contractors.

The vote came nearly two weeks after Uber, Lyft and DoorDash threatened to spend a collective $90 million to lobby against the bill known as AB5, as well as several weeks of demonstrations by supporters of the bill.

AB5 is expected to move quickly through the state Assembly before awaiting the signature of California Democratic Gov. Gavin Newsom, who expressed support for the bill in a Labor Day op-ed.

“Today, our state’s political leadership missed an important opportunity to support the overwhelming majority of rideshare drivers who want a thoughtful solution that balances flexibility with an earnings standard and benefits,” Lyft told the Daily Caller News Foundation in a Wednesday statement.

“The fact that there were more than 50 industries carved out of AB5 is very telling. We are fully prepared to take this issue to the voters of California to preserve the freedom and access drivers and riders want and need,” the statement continued.

Sen. @MariaEDurazo kicks off debate: “Let’s be clear, there’s nothing innovative about underpaying someone for their labor and basing an entire business model on misclassifying workers.”

“This victory is a direct result of drivers organizing. Drivers continued to fight for a voice in the face of insidious tactics by corporations to spread misinformation and squash their demands,” driver group Gig Workers Rising wrote in a statement after the Senate vote, according to technology website Gizmodo.

“As we commemorate this moment we take renewed energy towards the fight for unionization,” the statement continued.

The legislation states that “the misclassification of workers as independent contractors has been a significant factor in the erosion of the middle class and the rise in income inequality.”

Companies sometimes recognize their workers as independent contractors as a loophole “so that they … do not have to pay payroll taxes, the minimum wage or overtime, comply with other wage and hour law requirements such as providing meal periods and rest breaks, or reimburse their workers for business expenses incurred in performing their jobs,” according to the California Department of Industrial Relations.

Silicon Valley giants guaranteed their drivers bonuses, 100% of tips from passengers and a minimum of $21 an hour in proposals for AB5 exemption, but that would only apply to time they spend actively getting riders from one place to another. Waiting for riders or driving to their pickup spot is not included in that time.

Because every worker deserves safe working conditions, benefits, and a union, I support #AB5, a bill that would bring workplace protections to a million Californians.