The Campus Crisis Is a Fictional Tale 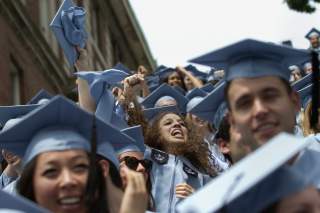 As the House Intelligence Committee impeachment hearings were livestreamed from Capitol Hill, a group of students at the University of Florida launched an attempt to impeach their student body president for his role in bringing President Donald Trump’s eldest son to speak on their campus.

Just a month later at Northwestern University, student journalists, under pressure from their classmates apologized for publishing photos of students protesting against the Trump administration’s immigration policies.

In the past few years, it has been common to see media reports such as these that highlight sensational incidents of political conflicts on American college campuses.

But are headlines and anecdotal reports telling the real story?

As scholars of religion and politics, we wanted to get a larger perspective. So we conducted detailed surveys of representative samples of American college students at five selective U.S. universities, including both public and private schools in the Northeast, the Midwest and the South, collecting data from over 5,600 students.

In our new report, “Politics on the Quad,” we find that the way students describe the political climate on their campus often differs dramatically from what the public sees in headlines and via social media.

Headlines are not the whole story

News reports claim that “Trumpism” is dividing American campuses. But at the schools we surveyed since Trump became president, opposition to “Trumpism” actually unites liberal and moderate students.

News reports also say that the toxic political climate in Washington is fracturing campus life along political lines and that conservative students are being ostracized on liberal campuses.

Then there’s the claim that American campuses are uniformly hostile to the free expression of unpopular ideas, leading students to engage in “self-censorship.” But we found a much more complicated story.

At Brandeis University and Harvard, more than 60% of liberal students felt that unpopular opinions could not be expressed freely on their campus, and their moderate and conservative peers agreed.

Yet, at the University of Florida, a majority of students, regardless of ideology, felt that their campus was open to the expression of unpopular viewpoints.

Despite these differences, we found that students of a given ideological group tended to have similar views on a variety of hot-button issues regardless of what school they attended, suggesting that national political debates can serve as powerful cues for how students think and talk about politics on any given campus.

And it’s true that political debates on campus sometimes become so contentious that they dramatically impact campus life. This was the case at Evergreen State College in 2017, where conflicts surrounding a protest against racism on campus led to a campus-wide lockdown.

But other research we’ve done tells us that for many students the biggest concerns are not politics or discrimination or free expression, or the other issues that dominate headlines about campus conflict.

They are worried about how they will pay their student loans, whether they will pass their next exam or just how to stop feeling lonely or sad.

Yale psychology professor Laurie Santos witnessed the scope of the problem firsthand when she offered a new class on happiness. One-quarter of the entire undergraduate student body – over 1,000 students – signed up.