Can America Live with a Nuclear North Korea? 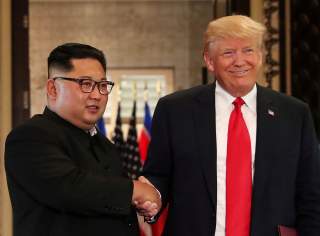 A friend asks: can America live with an atomic North Korea, and could any presidential administration openly admit it can? Yes it can, and no it couldn’t. The Trump administration and its successors can live with a North Korean doomsday arsenal because living with it represents the least bad option at hand. Military action is the other apparent alternative to the administration’s “maximum pressure” strategy of stifling the North into compliance through diplomacy and UN-approved economic sanctions. Yet the hazards, costs, and sheer uncertainty of war abound. Few presidents would embrace armed force barring an unambiguous and egregious provocation from Kim Jong-Un & Co.

Forcibly disarming Pyongyang could and probably would involve sacrificing thousands of American and Korean lives. Here’s a crude yardstick. The Korean War, a conventional conflict to preserve an independent South Korea, cost the United States some 37,000 military lives. Many more service folk suffered wounds. Thirty-seven thousand. That’s more than fivefold the combined American military death toll from the Afghanistan and Iraq wars since 9/11. And that leaves aside countless more Korean military and civilian lives expended fighting to the current standstill along the inter-Korean border.

It’s hard to see how war could be waged more cheaply than it was in 1950-1953 when the principal combatants, not to mention North Korea’s ally China and neighbor Russia, all boast nuclear weapons to accompany formidable conventional forces. And Washington must not delude itself into thinking air and sea power can do the job alone, any more than aviators and mariners repulsed the North Korean invasion in 1950. It took land forces back then—and today, in all likelihood, ground combat would be required to destroy the dug-in North Korean nuclear complex.

Any military strategy worth the name would demand that U.S. Army and Marine forces again seize and control ground—allowing them the leisure to ferret out underground facilities and armaments.

In short, a new Korean War would not be a come-and-go affair. Such a forecast is solidly grounded in the classics of strategy. For instance, Admiral J. C. Wylie points out that the proper goal of military strategy is to impose control on the foe. Aircraft and missiles flit by overhead while ships remain offshore. Though formidable, their presence is too intermittent to qualify as control. That being the case, he pronounces the soldier slogging through mud the “ultimate determinant” of who emerges the victor. The soldier goes and stays. “He is control,” proclaims Wylie. No control, no strategic success.

Or as the historian T. R. Fehrenbach puts it regarding the Korean War: “you may fly over a land forever; you may bomb it, atomize it, pulverize it and wipe it clean of life—but if you desire to defend it, protect it and keep it for civilization, you must do this on the ground, the way the Roman legions did, by putting your young men in the mud.” Wylie says much the same thing when he observes that— aviators’ and rocketeers’ assumptions notwithstanding—the ability to destroy something from aloft does not equate to controlling it.

Nor is it obvious that winning control is crucial in Northeast Asia. For the sake of discussion let’s use the Pakistani nuclear force in 2004 as a crude measuring stick for North Korean ambitions and the international response. Why 2004? Because that was six years after Islamabad’s atomic breakout, and after Islamabad started manufacturing nukes in earnest. We can date the start of Pyongyang’s bombmaking enterprise to February 2013, when, as the trusty Nuclear Threat Initiative reports, North Korean weapon scientists detonated a “lighter, miniaturized atomic weapon.”

Suppose Pyongyang manages to build up to a force comparable in numbers and capability to Pakistan’s six years in. That would make the final tally somewhere in the neighborhood of seventy-five tactical nukes. Washington grudgingly made its peace with a Pakistani bomb back then. Is forcible disarmament today worth the likely costs of sending the descendants of Fehrenbach’s legions? Doubtful. Ergo, America will learn to live with what must be lived with. It should ponder ways to reinforce atomic deterrence vis-à-vis North Korea—just as it has acclimated itself to every other new entrant to the nuclear club from the Soviet Union forward.

But foreign policy is a messy thing. It often demands a measure of duplicity. Even as it accommodates itself to an unpleasant new normal, the Trump administration cannot admit Pyongyang’s bombmaking enterprise is here to stay for fear of gutting U.S. policy of decades’ standing. Successive administrations have made “comprehensive, verifiable, irreversible disarmament” the paramount goal of U.S. policy on the Korean Peninsula. Presidents and their lieutenants from both parties have restated their commitment to disarmament openly, loudly, and often.

Climbing down from bipartisan public commitments verges on impossible. Negotiations specialists such as the late, great Thomas Schelling will tell you that any leader who makes a public commitment to some policy or strategy—and does so over and over again in uncompromising language—binds himself to keep that commitment. Fail to keep faith and you appear weak and vacillating in your constituents’ eyes. No one relishes looking feckless.

So strong is this “commitment tactic,” in fact, that Schelling urges statesmen to deploy it to deter or coerce opponents. A hard bargainer deliberately takes away his own freedom to compromise. Issue a deterrent or coercive threat in public and you bind yourself to execute it. Do it convincingly enough and your antagonist will regard the threat as almost self-executing: he knows the threat will automatically go into effect if he defies it. The commitment tactic places the burden squarely on your antagonist—but you cannot waffle lest you eviscerate your reputation for toughness, probably forever. U.S. presidents have likewise bound themselves to seek comprehensive, verifiable, irreversible disarmament in Northeast Asia.

Abandoning the ideal of disarmament would also discredit nonproliferation principles graven on the international system since the 1960s and sanctified in the Nuclear Nonproliferation Treaty (NPT). Under Article VI of the treaty, NPT signatories pledge to “pursue negotiations in good faith on effective measures relating to cessation of the nuclear arms race at an early date and to nuclear disarmament, and on a treaty on general and complete disarmament under strict and effective international control.” The pact obliges not just unofficial nuclear-weapon states such as North Korea but officially recognized nuclear powers such as the United States, China, and Russia to work toward “global zero,” to use the latest catchphrase for complete disarmament.

Not only does Article VI voice a worthy ideal, it’s the law of the land in the United States. After all, the U.S. Constitution designates international agreements that go through the advice, consent, and ratification process at the White House and on Capitol Hill as U.S. law. It is possible to postpone enforcing a law. It would be inadvisable for any president to openly denounce it. Chances are, then, Washington will continue to insist on complete disarmament on the Korean Peninsula but will refrain from using force to bring about that happy end. The ideal will stand. But ideals are seldom reached in human affairs—only approximated.

So there’s my somewhat bleak answer to the question posed. Washington will probably forego military action to eliminate Pyongyang’s nightmare weapons while sorting out how to deter the North and sticking to its diplomatic line. And who knows? If Kim Jong-Un wakes up each morning and decides not to roll the iron dice—and opts for forbearance enough mornings in a row—sooner or later good things may happen in the disarmament realm. One can hope.

James Holmes is J. C. Wylie Chair of Maritime Strategy at the Naval War College and coauthor of Red Star over the Pacific. He formerly did nonproliferation work at the University of Georgia. The views voiced here are his alone.