Can American Howitzers Help Ukraine Turn the Tide in the Donbas? 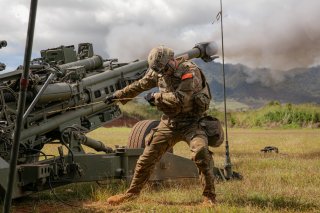 Ukraine’s armed forces are putting their U.S.-supplied 155 mm M777 towed howitzers to good use against Russian forces in the country’s east, according to the Pentagon.

"You're already seeing the Ukrainians being willing to go on the counteroffensive in the Donbas [region of Ukraine]. They are taking back some towns that the Russians have taken in the past," a senior Pentagon official said in a press briefing on Monday.

"We do believe that the howitzers … are having an impact, particularly in Kharkiv. Now is that the only reason? I don't think we would go that far to say that, but we do believe that the systems they're getting—not just the U.S. systems but the systems from other countries—are absolutely helping them regain some momentum and to take back some territory," the official added. Kyiv said earlier this week that the Ukrainian military managed to push Russian forces out of the suburbs surrounding Kharkiv, Ukraine’s second-largest city, as fighting continues to rage in the eastern Donbas region.

"In the area of the settlement of Podgornoye, the Russian teams of unmanned aerial vehicles and artillery reconnaissance systems established the coordinates of a firing position of US-made 155mm M777 howitzers used by the Ukrainian military. The operators of unmanned aerial vehicles delivered a missile strike on the firing position of the battery of American howitzers, damaging several guns," the Russian Defense Ministry claimed in a statement, according to state news outlet TASS. "As soon as the Ukrainian militants concentrated prime movers and guns in the forest, they came under an artillery strike. All the equipment and American howitzers were eliminated,” Russia’s statement added.

Pro-Russian social media accounts are circulating a clip purporting to show a Russian drone, identified by military researcher Rob Lee as a KUB-BLA loitering munition, striking a Ukrainian howitzer position in an undisclosed location. It is unclear from the footage if the attack managed to wound the crew or cause damage to the equipment.

A senior U.S. defense official told CNN earlier this month that almost all of the ninety howitzers pledged by Washington to Ukraine have been transferred to Ukraine. The Biden administration previously told reporters that it does not have the means to reliably track its weapons shipments to Ukraine’s armed forces after they change hands at the Polish border. There is no concrete information on how many foreign-supplied Ukrainian howitzer systems have been successfully targeted by Russia’s military to date.