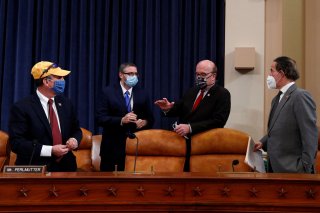 The spread of the coronavirus has created unprecedented problems for Congress as it confronts how to conduct legislative business after the infection of several members.

For all of U.S. history so far, the House and Senate have had to take votes in person, in their respective chambers. Now, public health measures may prevent that.

As a former counsel for the House of Representatives from 1976 to 1983, I believe the Constitution permits Congress to use a method of voting other than gathering on the floor of their legislative chambers.

Democratic leadership in the House evidently agrees: They will soon bring a proposal to the House to allow proxy voting during the pandemic. That means a member who is present in the House could cast a vote on behalf of a member who has been forced to stay at home.

The Framers who designed the constitutional structure for how things would work in Congress based it on parliamentary and colonial practices.

Members of Congress had and still have to vote in person on the floor of the House or Senate. But when the first Congress officially convened on March 4, 1789, due to bad weather and difficult travel, a quorum was not present. Without a quorum - a simple majority – there weren’t enough members there to actually conduct business. The ballots for president and vice president could not be counted and no legislation could be passed or revenue raised. A quorum finally assembled on April 1 in the House and April 5 in the Senate.

The Framers might not have anticipated the extraordinary steps that Congress would have to take in a crisis such as today, when public health measures could dictate that hundreds of members be prevented from meeting on the floor of the House or Senate.

Yet the language the Founders used 233 years ago may nevertheless permit technological innovations now to facilitate voting from places other than the actual physical House and Senate chambers.

Leeway in the rules

The U.S. Constitution directs that Congress “shall assemble” at least once a year.

While the dictionary definition of “assemble” includes “to meet” or “to gather,” there is no indication that virtual assembly would be prohibited under the Constitution.

What guidance the Constitution provides suggests wide leeway in deciding how to fulfill its requirements.

For example, the Constitution says that a “majority of each [house] shall constitute a quorum to do business” but does not specify how each house should determine what constitutes a quorum.

For years, until 1890, the view in the House was that satisfying the requirement for a quorum meant an absolute majority of members living and seated had to vote on any proposition. This resulted in members refusing to cast votes and thereby preventing a quorum and obstructing the House’s business.

In 1890, Speaker Thomas Reed ruled that members present in the chamber but not voting would be counted in determining a quorum.

The Senate has a slightly different rule but has the same discretion to make a similar determination.

Congress can make its own rules

How Congress works is not dictated only by what is constitutional. There are rules within the House and Senate that also govern what each body can do.

Currently, House rules say that “[e]very Member shall be present within the Hall during its sittings … and shall vote on each question put.”

The Constitution allows each house of Congress “to determine the Rules of its Proceedings.” The constitutionality of those rules has been challenged over the years, but the Supreme Court has said that Congress’ power to formulate and impose such rules is “absolute and beyond the challenge of any other body or tribunal.”

That means both the House and Senate have the power to amend their rules to allow a method of voting that does not require them to assemble on the floor of their chambers.

This change could be constitutionally allowed and technically feasible. But it raises many other questions, from people’s faith in Congress’ trustworthiness to the vulnerability of such a system to outside attacks.

If Congress adopts remote voting, its major challenge is to create a system that can be protected against fraud, hacking or proxy voting.

While the Senate still requires voice or hand votes, the House implemented electronic voting systems in the early 1970s. By the 1980s, suspicions had arisen that House members, either for their convenience or to avoid an absence, lent their electronic voting cards to one another to enter their votes. Since no House rule specifically allowed such proxy voting on the floor, there was a question of whether such a practice was permissible under House Ethics rules.

Following a House Ethics Committee investigation into these anomalies, they adopted a rule preventing proxy voting on the House floor. Obviously the House would have to come up with a system for preventing such abuses from recurring.

Of course, such a system could be devised for limited use during emergencies, with a return to traditional voting in the chamber once the emergency has passed.

This is an updated version of an article originally published on March 24, 2020.