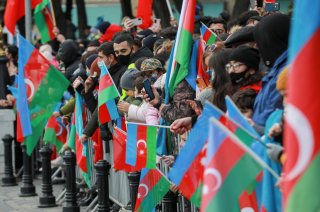 2020 was a decisive year for the Nagorno Karabakh conflict between Armenia and Azerbaijan. In what had been a simmering conflict for more than twenty-five years—with periodic yet largely contained escalations—the map of the conflict was significantly redrawn last year. Azerbaijan, through military action and a subsequent diplomatic settlement brokered by Russia, reclaimed substantial Armenian-occupied territories in and surrounding Nagorno Karabakh, gaining much of what Baku had lost in the initial 1988-1994 conflict between the two countries.

In addition to the territorial map, the geopolitical map of the conflict was also redrawn. Russia, long a mediator in the conflict, became directly involved on the ground with the deployment of 2,000 Russian peacekeepers in and around Nagorno Karabakh following the truce reached on Nov 9. Turkey also became more involved, providing military assistance and assets like drones which proved highly influential in enabling Azerbaijan to break the decades-long stalemate of the conflict. Both Russia and Turkey are now set to jointly monitor the conflict, while Russian forces are already on the ground engaged in peacekeeping and mine clearance operations.

If 2020 was about Azerbaijan redrawing the map of the Nagorno Karabakh conflict, the key question for 2021 will be about what Baku can and can’t achieve with those gains. Already, the Azerbaijani government, led by long-serving President Ilham Aliyev, has come up with ambitious plans for the reintegration and development of the territories it has regained. Such plans have been nominally supported by Russian President Vladimir Putin, and even by Armenian Prime Minister Nikol Pashinyan, with the two leaders meeting with Aliyev in Moscow on Jan 11 for the first time since the ceasefire was declared in order to discuss the path forward for the region.

During their trilateral meeting, it was agreed that a working group would be established to address regional economic and transport infrastructure projects, with an official plan set to be submitted by March 1. Among the list of projects that are being planned or already currently underway are the construction of a new international airport in the Fizuli region, a new road connecting Azerbaijan to its exclave in Nakhchivan and further on to Turkey, and a railway between the Azerbaijani towns of Horadiz and Zangilan on the border with Armenia. Additionally, there are plans to develop the energy sector of Nagorno Karabakh, according to analysts from the Baku-based Center of Analysis of International Relations (AIR Center), with gasification works in the region planned by Azerigaz Production Association and an increase in the power supply of “strategic facilities” planned by Azerishig OJSC.

Such projects are quite ambitious, with many of them, including the Fizuli international airport, currently scheduled to be completed by the end of this year or early 2022. However, many of these projects could take much longer to get off the ground. Indeed, there are several significant challenges and constraints that could prove to delay—or disrupt altogether—Azerbaijan’s lofty goals for the region.

The first challenge is logistical. Just a few months into the ceasefire, there are still thorny issues that have yet to be fully implemented, including the return of 700,000 IDPs that fled the war zone and the movement of people from both Azerbaijan and Armenia into the region, which could take several years to accomplish. There are also thousands of mines and other dangerous materials from the conflict that need to be cleared before large-scale construction works and population movements can be conducted safely. In addition, there are economic considerations for implementing large-scale infrastructure projects, coming amid the global recession caused by the Covid-19 pandemic. Nevertheless, Azerbaijan has allocated 2.2 billion AZN ($1.3 billion) from its 2021 state budget for the reconstruction efforts, and international companies from Turkey, Italy and other countries are set to participate in this process.

Another challenge facing the future development of Nagorno Karabakh is political. While Azerbaijan has been celebrating its military victory and the popularity of Aliyev is arguably at a record high, Armenia has been thrown into political turmoil as a result of its losses in the conflict. Large-scale protests broke out in Yerevan and other cities following the ceasefire agreement, with many Armenians—including officials within the Armenian government—calling for the resignation of Pashinyan. Pashinyan has so far been able to remain in power, though he has said that early parliamentary elections would be held in the country sometime in 2021.

This leaves a lot of uncertainty about the future Armenian position regarding major infrastructure projects in and around Nagorno Karabakh, as well as to the ceasefire agreement itself. It cannot be discounted that, in the event of a change in power in Armenia, the country would try to reclaim some of its losses militarily. The presence of Russian peacekeeping forces in the region is likely to be a major check on any such ambitions by Armenia (or, conversely, any appetite by Azerbaijan to regain more territory), but this nevertheless remains a risk. Indeed, there have already been several ceasefire violations even after the Nov agreement, albeit largely limited.

Yet another challenge is geopolitical. Even if the political situation in Armenia does not significantly destabilize and both Yerevan and Baku honor the parameters of the ceasefire agreement, the conflicting positions of Russia and Turkey also need to be taken into account. While the two countries have so far cooperated on the ceasefire and have agreed to the establishment of a joint monitoring center, some of the strategic interests of the two players remain at odds. There have been indications that Turkey is considering the unilateral deployment of its troops to Azerbaijan outside of the parameters of the Russian-brokered ceasefire agreement, and broader tensions between Moscow and Ankara in theaters like Syria and Libya have the potential to spill over into the Nagorno Karabakh theater.

What’s more, the potential for enhanced involvement by other external players—including the United States, EU, and China—could make the situation even more convoluted and problematic. This is particularly the case as countries like the United States and France have significant and influential Armenian diasporas, which their respective governments may feel the need to assuage. Competition for involvement in the infrastructure projects among rising players like China could also raise tensions with more established players like Russia and Turkey.

Despite all of these challenges, there are substantial opportunities that the development of the region can bring if a renewed conflict in Nagorno Karabakh can be averted. The territory is located within the highly strategic Caucasus region and consists of the Southern Corridor, a key transit zone for energy supplies from Azerbaijan through Georgia to Turkey and on to Europe, as well as a key component of the International North-South Transport Corridor, which includes Russia and Iran. If the peace between Armenia and Azerbaijan can hold and if Yerevan and other regional players were to be incorporated as cooperative partners within a broader transport and logistical framework, this could unleash significant economic potential well beyond the region. Such economic projects could offer opportunities for both economic revival in the region and serve as a mechanism to maintain a durable peace. Yet, due to the uncertain political atmosphere and complex geopolitical realities in the Caucasus region, such opportunities for economic growth and peaceful development are by no means guaranteed.

Eugene Chausovsky is a Non-Resident Fellow with the Center for Global Policy. Chausovsky previously served as Senior Eurasia Analyst at the geopolitical analysis firm Stratfor for more than 10 years. His work focuses on political, economic and security issues pertaining to Russia, Eurasia, and the Middle East.