Can Europe Mend Ties With a Self-Isolating Russia? 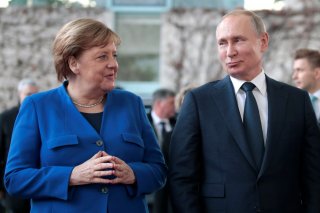 September will be an important month for both Germany, where the electorate’s decisions will determine who will succeed Chancellor Angela Merkel and the government she heads, and Russia, where heavily conscripted voters will turn out in lesser numbers to select members for the next Russian Parliament (or Duma). That Duma’s term of office covers Russia through to 2024. Vladimir Putin will then be replaced as President by, in all probability, Vladimir Putin, thanks to critical constitutional and legalized administrative changes pushed through over the course of 2020-2021, by force and fraud. The Kremlin is putting in all it can by using these tools to achieve a constitutional majority in the Duma this Autumn. But can it achieve a convincing result legitimating the new order in September?

What happens as a result of both events this year will therefore be important, and perhaps difficult, for the whole of Europe, whether member states of the European Union or not, and the United States and Canada, as fellow members of NATO. In April 2022 presidential elections are also due in France, an EU member state that sees itself as at least co-equal with Germany. This is not the place to discuss a number of other tensions that have troubled the Union. But it is right to point out that both Chancellor Merkel and President Emmanuel Macron have disturbed EU member states closer to the realities of Russia today by feeling out the possibility of establishing a more productive relationship with Moscow, perhaps in imitation of President Joe Biden’s preliminary and condition-governed discussions with President Putin in Geneva on June 6.

This is not to suggest that Germany’s next Chancellor, whoever he or she may be, will be likely to rush into a visit to Moscow with an action plan ready to hand. But it is a fact, to quote a new study of Germany’s relationship with Russia that that relationship is the most developed of any EU country and that the German instinct is to shy away from confrontation with Moscow if it can. Some sort of early Berlin contact with Putin is, therefore, to be expected, if only by way of introducing the new Chancellor.

The fact is that productive and reconciliatory new European relationships with Russia are improbable, even for Berlin. Moscow is in a bind of its own, and of its own making. It is all very well for Germany to have hoped over the years that dialogue supported by a broad relationship between particular interests, whether economic or societal, will lead to constructive political change in Russia. That would necessarily depend on Moscow answering the overtures of others in kind. It hasn’t. There is no sign that it will now. Quite to the contrary.

Domestic repression has been progressively and radically tightened in Russia over the last year and a half. Navalny is of course still locked in jail, as many others are for no credible reason other than suspicion of disloyalty. Putin can come out with sweet words, as he did on June 22 in his article for Die Zeit, about his regard for Germany, and his hopes of a Europe from Vladivostok to Lisbon (not to go further West of course). But Russia’s practiced and determined support for the brutal destruction of unrest in Belarus, to say nothing of its action and threats against Kiev tell a different story. Putin’s article of July 12 justifying his claim that Russians and Ukrainians—Belarusians too—are of one nation accused the EU of drawing Kiev into a dangerous geopolitical game to create a barrier between Moscow and Europe, while Moscow had done all it could to stop brothers murdering each other.

Putin’s Russia has isolated itself. The outcome is beyond present prophecy. The next German Chancellor will like the rest of us have to face the risks inherent in that together.

Andrew Wood is an associate fellow of the Russia and Eurasia program at Chatham House. He previously served as British ambassador to Yugoslavia and Russia.