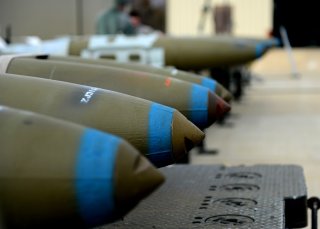 While Hezbollah is not believed to have crossed Israel’s red line on this issue—a threshold that could trigger a preemptive attack on stockpiles of PGMs on Lebanese soil—it is continually taking steps towards it.

With Iran’s help, Hezbollah has recently explored ways to manufacture PGMs in Lebanon to avoid Israel’s effective grey zone campaign to disrupt the proliferation of advanced weapons from Iran to its regional proxies.

The ability to set up an indigenous PGM production capability in Lebanon—in which Hezbollah would merely receive components and independently assemble them, rather than rely on Iran for fully-built imports—represents a truly dangerous situation that Israel cannot tolerate in light of the instability that this scenario would cause.

“We have to go back in time and ask ourselves, how did we get to this stage?” says Brig. Gen. (ret.) Zvika Haimovich, former commander of the Air Defense Forces in the Israeli Air Force and a senior research fellow at the MirYam Institute.

Haimovich notes two processes that have led to the current situation. The first is a learning process by Iran and Hezbollah. Tehran and its proxy examined the estimated 20,000 projectiles fired at Israel—most of them by Hamas in Gaza—over the past fifteen years and found that only minimal damage was caused.

“Statistical (unguided) weapons had a big cognitive effect on the public but little practical effect,” says Haimovich. The second factor he notes is the revolution in standoff guided weapons technology. Whether rocket, missile, or drone, the latest technology enables these weapons to be fired from the ground, air, or sea to accurately strike targets, creating major damage, Haimovich says.

To illustrate the difference between the threat of guided and unguided projectiles, he states: “Until now, around 25% of statistical, unguided weapons fired at populated areas were on course to their targeted areas. The entry of precision-guided munitions changes these parameters.”

Given that Iron Dome has intercepted approximately one-quarter of all incoming rockets from Gaza and is programmed to shoot down only threats heading for built up areas, the accuracy level of unguided rocket barrages is fairly clear, Shohat says, adding that “This strike level for statistical rockets of around 25% hasn’t changed since the 2006 Second Lebanon War.”

In contrast, PGMs can not only ensure that areas of interest are hit but can fire projectiles at an accuracy of between five to ten meters from the target, representing a completely new level of precision strike capability.

“What was once the reserve of a trained air force with pilots—the ability to hit precise targets, like a power station or a research center, can now be done with PGMs,” says Shohat.  “If an adversary had to fire four munitions to hit one target, today one munition is enough.”

These conclusions became clear to Iran and Hezbollah, Haimovich says, and in the decade that followed the Second Lebanon War, the shift to PGMs became apparent.

“Hamas is also trying to get PGMs into its inventory,” Haimovich warns.

“In the end, it all comes from a single catalyst—Iran. The Iranians provide the knowledge and the technology. In the past, they went for the “easy” option of transferring the missiles pre-assembled. Then they understood that these smuggling runs are discovered easily by Israel, and that Israel’s intelligence community had become far too adept at recognizing missile convoys, cargo flights, or shipments,” he adds.

“So, in the past ten years, they started with the idea of transferring knowledge to local proxies,” continues Haimovich.

Iran and Hezbollah have made multiple efforts to get such GPS guidance kits into Lebanon. Israel has made it abundantly clear to its enemies that if its red line on this type of proliferation is crossed, action will follow.

The reason, Haimovich explains, is because even an ability to hit a small number of key strategic targets in a war will change the course of the conflict to Israel’s considerable detriment. And that means only a small number of PGMs are sufficient to pose an intolerable threat.

“If Hezbollah decides to only hit five strategic targets with a projectile that has a 10 square meter radius accuracy in one day, that’s enough to change the picture,” notes Haimovich. “This is a changing reality. As a state, we can’t tolerate the other side having accurate weapons in big scopes that can threaten strategic assets.”

Shohat states that even if Hezbollah gets hold of the Iranian guidance kits, “we will defeat them.” However, he says, “we do not want this ‘grass’ to grow and create problems. This is a good example of Israel drawing clear red lines and doing it seriously—not just at the rhetorical level.”

Although the Iran-Hezbollah axis is continuing its efforts to create a PGM arsenal, it is doing this “much less than it would want to,” says Shohat.

And in places like Syria, used as a conduit to smuggle the weapons, “each time something gets ‘lost’ on the way” to its destination, he adds. “Most importantly, this gives Israel a better opening position on the day that a war begins. This is cutting the grass. It doesn’t mean that the grass isn’t growing, but when the war starts, the grass will be as low as possible.”

Haimovich explains that Israel’s red lines are designed to prevent two intolerable threats from materializing. The first is allowing Hezbollah to possess large numbers of accurate weapons that can threaten strategic assets such as oil refineries and power stations. “Even if these sites recover from attacks within days, the cognitive effect will be major,” he warns.

The second is the ability of Hezbollah to disrupt the IDF’s own continuous functionality. “If Hezbollah strikes air force bases, and even if it only takes five to six hours to repair the runaways, that would create a very significant effect nevertheless,” he says. “Hence, we cannot accept a reality in which the other side can impact civilian and military continuous functions. Israel must do everything that it can to reduce these enemy capabilities.”

Cruise missiles and unmanned aerial vehicles are also part of the precision strike club, explains Haimovich, regardless of whether they carry five kilograms of explosives like a UAV, or 300 kilograms like a Scud B missile.

Hezbollah is not the only nearby threat possessing these capabilities. “Hamas also has a precision project,” he adds.

With PGMs giving attackers a far higher chance of destroying a selected target, the obligation for more advanced air defenses is paramount, compared to previous levels of defenses, says Shohat.

“We need more interceptors. The ‘quarter principle,’ in which we only needed to shoot down around 25% of statistics projectiles, no longer holds against PGMs,” he says. “With PGMs, we need to be able to intercept everything.”

Haimovich explains the threat of accurate weaponry “obligates us to prepare differently. Systems must be able to examine threats selectively and focus on those that form strategic threats, while still also acting as area-based defenses to protect populated areas,” he says. “This calls for a robust concept, which integrates both specific site protection with regional defense—and mutual coordination between them.”

Another challenge for air defense systems posed by PGMs, notes Haimovich, is being able to recognize and distinguish PGMs from inaccurate projectiles in a crowded sky.

“Israel has highly advanced capabilities that enable a high-level performance. Still, this is a major challenge, to pick the right threats out of a barrage of rockets, to find the needle in the haystack,” he says.

Asked to discuss the option of a preemptive attack on PGM stockpiles, Haimovich says this would be a cabinet decision and that the topic constitutes a “legitimate decision on the table of the political echelon.”

He adds that questions about what would trigger such an attack remain open, pointing to potential thresholds such as the quantity of PGMs amassed by Hezbollah. In any case, Israel is “acting all of the time to delay the need to deal with this” in the form of its grey zone campaign in Syria to disrupt weapons smuggling.