Can Israel Navigate Its Dangerous Neighborhood? 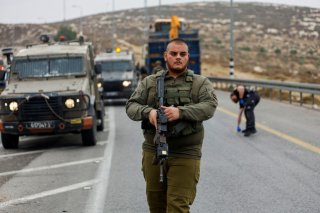 In this special episode of the Israel Defense and Diplomacy Forum, Chuck Freilich, former Israeli deputy national security advisor, interviews Danny Ayalon, former deputy foreign minister and ambassador to Washington, about his experiences as Israel’s ambassador to the United States and what it was like when he first arrived in Washington.

He describes his sense of awe when first arriving in Washington and his experiences meeting with the president, Secretaries of State Colin Powell and Condoleezza Rice, Secretary of Defense Donald Rumsfeld, and others. A number of particularly important issues arose during his time in Washington, including the Second Intifada, the Gulf War, and the war in Lebanon, as well as Israel’s decision to destroy the Syrian nuclear reactor. Danny also shared some of the fascinating personal and professional insights he derived from this period.

The podcast begins with a discussion of some of the major developments in recent weeks. Chuck expresses his deep concern over the already rising violence in the West Bank, even before the new government has taken over, including the appointment of radical new ministers who will intentionally fan the flames of unrest. He also foresees that their actions could spark the next conflict with Hamas, in a matter of weeks or months, and that such a conflict may spread to Hezbollah and endanger the future of the Palestinian Authority. Danny shares some of Chuck’s concerns but believes that we can count on the experience and wisdom of Prime Minister Netanyahu to counterbalance the dangers. Chuck likens Danny’s optimism to that of the Titanic’s captain.

Chuck and Danny then engage in a discussion of the latest developments regarding Iran, including its decision to enrich uranium at the 60 percent level. Once again, they spar over the options available to Israel and the US.

Chuck believes that the approach adopted by Netanyahu and Donald Trump was a typical example of right-wing overreach and utter failure. They correctly identified the problem, but set unrealistic goals, without a serious attempt to think things through and weigh the different options. He asserts that we are now paying the price in the form of Iran’s enrichment and more. Both agree that Iran will be a primary focus of Netanyahu’s new term as premier and that possible strains to the US-Israeli relationship will affect this.

Benjamin Anthony is Co-Founder & CEO of the MirYam Institute.