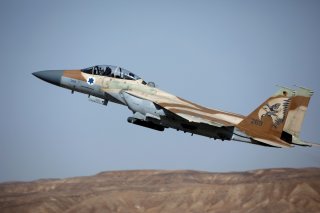 Since Syria’s crisis erupted a decade ago, countless state and non-state actors have been involved in the conflict. Iran and Israel have been key among them. For years, these two enemies have challenged one another in Syria, where both Tehran and Tel Aviv have incredibly high stakes. As the civil war gradually winds down with President Bashar al-Assad’s government emerging triumphant, the Israelis may eventually have to accept heavy Iranian influence in post-conflict Syria as a reality. Yet Tel Aviv appears determined not to accept this reality, suggesting that Syria could remain a hotspot in Iranian-Israel hostilities for years to come.

For Iran, keeping the Assad regime in power is a key national security interest and critical to ensuring the survival of one of the Islamic Republic’s only regional allies. Officials in Tehran believe that the Ba’athist order falling to anti-Iranian forces would gravely threaten Iran’s regional influence and strategic depth by potentially cutting off Tehran’s access to Hezbollah in Lebanon, Iran’s most strategically prized asset in the Arab region. Such threat perceptions help explain why Tehran has invested so much blood and treasure in Syria in the face of both “moderate rebels” and more extreme actors, such as Da’esh (the Islamic State) and Al Qaeda-linked groups, posing existential threats to Assad’s government.

Israel views increasing Iranian entrenchment in their northern neighbor as unacceptable. While officially “neutral” in Syria’s civil war, growing Iranian activity in the country has prompted Tel Aviv to draw its own “red lines“ and take military actions aimed at countering Iran and its allies in Syria. Israel has bombed Iran-linked targets in Syria thousands of times throughout the civil war. Tel Aviv has embraced a “mowing the lawn“ strategy to weaken Iran’s hand by executing continuous airstrikes against Islamic Revolutionary Guard Corps’ (IRGC) fighters and various Tehran-backed Shi’a militias such as Lebanese Hezbollah and the Fatemiyoun Brigade.

The Israelis have conducted these strikes with Washington’s support. Beginning during Donald Trump’s presidency and continuing with President Joe Biden in the White House, the United States has shared intelligence on Syria-based targets with Tel Aviv and also carried out its own strikes on Iran-linked assets in Syria. The new administration’s first use of military force occurred on February 25 when the U.S. military carried out airstrikes against facilities belonging to Kata’ib Hezbollah and Kata’ib Sayyid al Shuhada in Abu Kamal, Syria, located near the Iraqi border. Reportedly, these strikes killed almost two dozen militants. Officially, these strikes were a response to the February 15 rocket attack on American forces in Iraq.

Years of Israeli raids, beginning in 2013, have impacted Iranian movements in Syria, hampering Tehran’s ability to transfer arms and technology to its proxies in Lebanon and Syria by targeting weapons depots and other logistics infrastructure. More recently, reports have indicated that Israel is waging a targeted campaign against Iranian oil smuggling, including using limpet mines to strike nearly a dozen Iranian ships carrying illicit oil to Syria. These attacks have frustrated Tehran and forced Iranian/Iran-backed forces to reorient their operational tactics by, for example, hiding in residential neighborhoods and constructing underground fortifications. Nonetheless, such Israeli attacks have failed to significantly harm Iran’s fundamental interests in Syria.

In interviews conducted by the authors, leading Iran experts agreed that no evidence demonstrates that these thousands of Israeli strikes have drastically weakened Iran’s resolve or severely undermined its operational capabilities in Syria. The National Iranian American Council’s Sina Toossi argued that “while Israel has made some gains with this limited tactical campaign, Iran is playing the long game in Syria and has strategically bolstered its regional position.” Dina Esfandiary, who advises the International Crisis Group’s Middle East and North Africa Program, maintains that “Israeli attacking of Iranian positions in Syria is a nuisance and problematic for Tehran” albeit without “having much of an effect.” Rouzbeh Parsi, the head of the Swedish Institute of International Affairs’ Middle East and North Africa program, explained that “it seems to me the attacks have some effect but that the Iranian presence (logistics, infrastructure, etc.) is too well developed to be seriously hampered by a strike here and there.”

Israeli hostilities against Iranian military personnel and interests in Syria may even serve to strengthen Tehran’s determination to continue its so-called “resistance“ agenda in the Levant. Israeli strikes have given the Iranians “reason to continue upping the ante in the region to stand up to belligerent powers like the Israelis,” according to Esfandiary. “Having said that, they also seem to be keen to not publicize it too much because that would dictate that they would have to respond in a more obvious and public way, and they want to avoid that.”

As the Syrian regime continues to consolidate its power, there is reason to expect Israel’s ability to strike Iran-linked targets in Syria with near impunity to weaken. Toossi explained that this is even more likely to be the case in the event that the Astana format moves forward with a new political order emerging in Damascus that rests on a power-sharing accord with Iranian, Russian, and Turkish support.

One outcome of the decade-long Syrian conflict will probably be stronger Iranian clout in the war-ravaged country. Such influence takes the form of both deep economic linkages between Iran and Syria, as well as the IRGC’s heavy military footprint. Israeli airstrikes are unlikely to eliminate, or even severely weaken, either. This is because of the extent to which Iran’s power in Syria is so consolidated. The largely triumphant Assad government, which owes much to Tehran, is in no position to tell the Iranians to leave.

Iranian economic influence in Syria could also expand, especially as the new U.S. administration maintains the “Caesar Act“ on Damascus. These crippling sanctions, which began during the final year of Trump’s presidency, isolate Syria from much of the international economy. Tehran, already hard-hit by sanctions and largely cut off from the global economy, will be in a strong position to benefit from Syria’s growing economic reliance on Iran, particularly as the country enters a reconstruction phase. Jihad al-Bina (the IRGC’s construction arm) is already busy with infrastructure projects throughout Syria, including developing residential units and, allegedly, establishing and operating the country’s telecommunications network. Moreover, the Caesar Act could make Gulf Arab states and other countries move cautiously when it comes to their investments and commercial relations with Syria, allowing Iran to capture a greater share of the reconstruction phase’s business opportunities.

Meanwhile, the IRGC and various Tehran-allied forces (Lebanese Hezbollah, the Fatemiyoun Brigade, Kata’ib Hezbollah, Kata’ib Sayyid al Shuhada, Zainabiyoun Brigade, etc.) will likely continue maintaining their strong presence in Syria that can help the Islamic Republic establish further deterrence over Israel, limiting Tel Aviv’s freedom to strike against Iran-linked assets in the region, as well as Iran itself. “The IRGC leadership considers its military involvement in Syria as a spectacular success,” said Ali Alfoneh of the Arab Gulf States Institute in Washington. “The IRGC not only managed to achieve its primary strategic objective of securing the survival of the Assad regime. It also managed to establish a dormant front against Israel with the aim of impacting [Tel Aviv’s] military calculations.” Iran’s military successes in Syria are partly because its non-Iranian militiamen from Afghanistan, Pakistan, Iraq, Lebanon, and elsewhere are relatively dispensable to Iranian officialdom. Iran’s leadership has been able to deploy these fighters to Syria without having to pay any political price in Tehran.

With Iran consolidating its influence in Syria, it appears that Israel lacks a viable political strategy for dealing with what may come next in Syria’s post-conflict period. Against the backdrop of a potential U.S. return to the Iranian nuclear accord that could possibly ease friction between Washington and Tehran, Israel might see a need to readjust its policies toward Syria. Within this context, it would behoove Tel Aviv to consider more realistic ways for safeguarding Israel’s longer-term security interests vis-à-vis Syria, which cannot indefinitely depend on a “mowing the lawn“ strategy.