Can the Marines’ Advanced Reconnaissance Vehicle Get the Job Done? 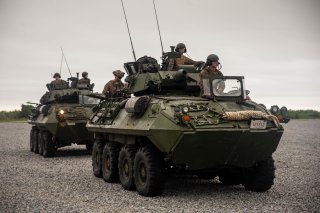 General Dynamics Land Systems (GDLS), one of America’s defense heavyweights, recently released new details about the Advanced Reconnaissance Vehicle it has in development for the U.S. Marine Corps.

Speaking to Jane’s, General Dynamics explained that it should have an initial platform available for testing by the Marine Corps, along with a blast hull, by this December—though what the vehicle could ultimately look like remains a mystery for now.

He added that “it will pass and disseminate the data that will be going through their intelligence, surveillance, and reconnaissance network. He also explained that [the prototype is] connecting both to the onboard and offboard sensors, to the uncrewed air, and eventually, ground robotic systems and sensors.”

Previous statements from the Marine Corps explained that the Advanced Reconnaissance Vehicle is “a key Fleet Marine Force modernization initiative” and that “the ARV Command, Control, Communications and Computers/Unmanned Aerial Systems will host a suite of C4 equipment, sensors, and operate both tethered and untethered UAS.”

“The ARV C4/UAS will employ an effective mix of reconnaissance, surveillance, target acquisition, and C4 systems to sense and communicate. These systems will enable ARV to serve as the manned hub of a manned/unmanned team and deliver next-generation, multi-domain, mobile reconnaissance capabilities.”

Given the Marine Corps’ amphibious nature, the vehicle is expected to be amphibious as well, as is the Corps’ new Amphibious Combat Vehicle. And while there has been talk that the Advanced Reconnaissance Vehicle could incorporate directed energy—i.e., laser—weapons, that remains speculative for now.

What is more concrete, however, is that the Advanced Reconnaissance Vehicle will be a significant step up from its predecessor, the Marine Corps Light Armored Vehicle.

While the Marine Corps has depended on the Light Armored Vehicle for armored reconnaissance since the 1980s, that vehicle has since grown long in the tooth.

Still, the top Marine might not be wholly convinced of the design. Speaking to Congress, Gen. David Berger explained that though he has “repeatedly stated that all-domain reconnaissance and counter-reconnaissance will be a critical element of any future contingency,” he remains “unconvinced that additional wheeled, manned armored ground reconnaissance units are the best and only answer – especially in the Indo-Pacific region.”

He added that the Marine Corps would “need to see more evidence during Phase III [development] to support this conclusion before engaging in an expansion of our existing capacity, or committing billions of dollars in procurement funds towards the acquisition of an Advanced Reconnaissance Vehicle.”