Can Military Robots Navigate Rough Terrain? The Army Thinks They Should 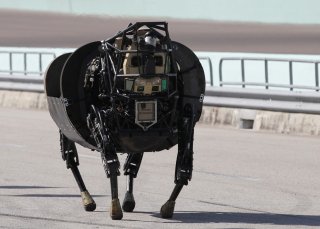 Autonomous robots actually have an easier time navigating uncertain terrain in urban areas, in part due to the many markers, structures, and roadway signs which AI-enabled computers can compile, analyze, and help the unmanned systems respond to.

While there is always more work to be done, much of this progress has been made to the point wherein robotic vehicles or even smaller, maneuverable drones can increasingly navigate their way through a series of urban obstacles without needing consistent human intervention. Thus.. the premise of autonomy.

“Urban environments provide many structural cues, such as lane markings, cross-walks, traffic signals, roadway signs and bike lanes, that can be used to make navigation decisions, and these decisions often need to be in alignment with the rules of the road,” Dr. Maggie Wigness, a researcher with the Army’s Combat Capabilities Development Command, Army Research Laboratory, Army Futures Command, said in an Army essay. “These structured markings are designed to cue the navigation system to look for something such as a pedestrian in a crosswalk, or to adhere to a specification such as stopping at a red light.”

But what about collecting and analyzing mapping and navigational data specific to more complex off-road areas with far fewer signals such as cross walks or other markers with which to make navigation decisions?

Given the importance of robotics when it comes to uneven terrain, off-road mobility, supply, and ammunition transport in more austere combat environments, Army scientists and researchers are developing a technology intended to provide an “entire sensor suite of data for off-road navigation,” called RELLIS-3D, an Army Research Laboratory essay writes.

RELLIS-3D provides cataloged, annotated, and detailed LiDAR and camera data that can be drawn upon for machine learning, so that robots and the networks they operate on can better understand otherwise too varied or complex terrain conditions.

“This allows researchers to leverage multimodal data for algorithm development and can be used to evaluate mapping, planning, and control in addition to perception components,” Phil Osteen, a scientist with the Army Research Laboratory, says in the Army essay.

Off-road datasets, which naturally do not adhere to or align with roadways, will be necessary in certain key respects when it comes to autonomous robotics maneuver in rocky, sandy, muddy, snow-filled, wooded, or generally uneven areas much more difficult to traverse.

“Sudden and constant changes in terrain require an off-road navigation system to constantly re-evaluate its planning and control parameters,” Wigness said. “This is essential to ensure safe, reliable, and consistent navigation.”