Can the Navy Recover the F-35 That Crashed Into the South China Sea? 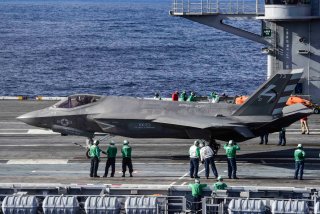 The U.S. Navy is preparing to salvage an F-35C that fell into the sea last week during routine flight operations with the USS Carl Vinson, according to reporting by USNI News.

Senior U.S. Navy personnel told the outlet that “the U.S. Navy is making recovery operations arrangements for the F-35C aircraft involved in the crash aboard USS Carl Vinson (CVN-70) in the South China Sea.” While the service did not provide additional details about the salvage operation, Japan’s Coast Guard did issue a NAVAREA Navigational Warning over the weekend.

NAVAREA Navigational Warnings are warnings broadcast by satellite or radio that contain information for vessels at sea. The Navigational Warning explained that the salvage operation, which is being carried out just west of the Philippines, would continue until further notice.

The F-35 crash occurred on January 24th during routine operations in the South China Sea. During the incident, an F-35 appeared to stall just short of the USS Carl Vinson’s runway and hit the edge of the flight deck. A seventeen-second video of the incident can be seen here.

A Navy statement regarding the incident stated that after the crash, “the pilot safely ejected from the aircraft and was recovered via U.S. military helicopter." The Navy added that "the pilot is in stable condition. There were seven total Sailors injured; three Sailors required MEDEVAC to a medical treatment facility in Manila, Philippines, and four were treated by on-board medical personnel. All three MEDEVACs are assessed as stable. Of the four Sailors treated by on-board medical, three have been released.”

It remains unclear exactly why the airplane crashed. However, photos circulating on social media show the F-35 floating on the surface of the water largely intact before the aircraft sank into the ocean.

While the sunk F-35 will likely never be able to fly again, a salvage operation would aim to secure the plane from prying eyes.

As the world’s most successful 5th-generation fighter, the downed F-35 would be a juicy target for the United States' adversaries. An adversary that found it could potentially gain insights into the fighter's capabilities and stealth package.

An intelligence bonanza of this magnitude could deal the F-35 program a severe blow and adversely affect the United States and all the other countries that operate the stealth fighter around the world.