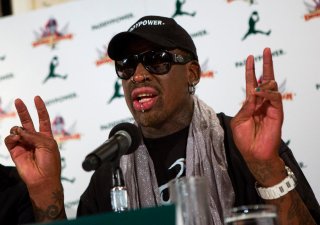 During his time playing professional basketball, Dennis Rodman was once described on the cover of Sports Illustrated as “the NBA’s weirdest player.” But the five-time NBA champion and basketball hall of famer has had an even stranger post-basketball career, becoming a freelance diplomat who has visited North Korea multiple times.

Rodman’s work in North Korea has usually been described as basketball-related, although per the Washington Post, his trips have been sponsored by “a media company, an online gambling outfit and, most recently, a marijuana cryptocurrency company.” He even received some praise for helping to bring about the release of Korean-American missionary and prisoner Kenneth Bae. Later, Rodman was nearby for the Trump administration’s diplomatic opening to the Kim regime, including the 2018 summit between Kim and Trump in Singapore.

Now, Rodman has another quest: he hopes to negotiate the release of WNBA star Brittney Griner, who is currently imprisoned in Russia. Griner has been in custody in Russia on drug charges since February, and, following a guilty plea and trial, has been sentenced to nine years in prison.

NBC News reported over the weekend that Rodman plans to visit Russia in order to try to bring the fellow basketball player home.

"I got permission to go to Russia to help that girl," Rodman told NBC News. "I'm trying to go this week.”

It’s not clear whose “permission” Rodman received. Per Fox News, there is currently a Level 4 travel advisory from the State Department, warning U.S. citizens about travel to Russia.

"Do not travel to Russia due to the unprovoked and unjustified invasion of Ukraine by Russian military forces, the potential for harassment against U.S. citizens by Russian government security officials, the singling out of U.S. citizens in Russia by Russian government security officials including for detention, the arbitrary enforcement of local law, limited flights into and out of Russia, the Embassy’s limited ability to assist U.S. citizens in Russia, COVID-19-related restrictions, and terrorism,” the warning says.

Indeed, one Biden administration official cautioned that Rodman’s plans to go to Russia may not be particularly helpful and could complicate existing efforts to bring Griner home.

“It’s public information that the administration has made a significant offer to the Russians and anything other than negotiating further through the established channel is likely to complicate and hinder release efforts,” that official told the outlet.

Former U.N. ambassador and New Mexico Gov. Bill Richardson, who has been involved in past hostage negotiations, told NBC that he was “optimistic about the chances for a prisoner swap that would bring Griner and another American, Paul Whelan, back to the U.S.”