Can the Pentagon Ramp Up Its Hypersonic Weapons Programs? 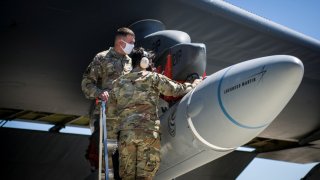 Earlier this month, Secretary of Defense Lloyd Austin met with the CEOs of more than two dozen of America's largest defense contractors and called for accelerated efforts to develop hypersonic weapons. Austin’s call comes as China and Russia are making advancements in the development of the game-changing technology.

Top executives from Lockheed Martin, Raytheon, Northrop Grumman, Boeing, Leidos, Aerojet Rocketdyne, BAE Systems, L3Harris, and about a half dozen other defense companies were represented at the meeting, which was chaired by Deputy Defense Secretary Kathleen Hicks.

"We need to anticipate how [China is] going to evolve its capabilities. And we need to be out in front of that," Austin told attendees of the meeting.

The United States’ effort to develop hypersonic weapons has suffered multiple setbacks in recent months. In October, the Pentagon said a test of a hypersonic glide body failed due to a problem with its rocket. In addition, a hypersonic missile failed to separate from a B-52H Stratofortress bomber during a test at Edwards Air Force Base last April. April’s test was the eighth test aimed at determining how to arm the Cold War-era bomber with the advanced AGM-182A Air-launched Rapid Response Weapon.

Three military branches, as well as DARPA and the Missile Defense Agency, are now pursuing their own programs. The 2022 Department of Defense budget committed $3.8 billion to hypersonic research, an increase from the previous year's $3.2 billion. While funding has been increased, one issue will be determining how the Pentagon should allocate funding for those various programs.

"The meeting between industry heads and a Defense Secretary was a rare occurrence and serves to underscore that hypersonic development is a priority to the U.S. military," explained William Davies, an analyst at the international analytics firm GlobalData.

"Despite a concerted push by DoD officials to advance hypersonic weapon timelines, the ambition will not be realized unless the 2023 budget shows targeted funding for achieving deployment of ongoing programs," Davies added.

The meeting between Secretary Austin and the defense industry leaders shed light on what industry insiders believe might be causing delays in hypersonic weapons development. Several factors have been cited, including supply chain constraints, budget instability, and access to wind testing facilities.

Such complaints will likely have an impact on future budget priorities, which may also include increasing workforce development funds to ensure that the United States remains competitive with its adversaries, GlobaData suggested.

"The U.S. has expressed significant concern recently about the proliferation of hypersonic weapons amongst adversaries, and this meeting will likely serve to focus minds on what needs to be done to enable defense primes to bring weapons to market on schedule," Davies noted. "The U.S. is likely to prioritize testing infrastructure such as wind tunnels and missile test ranges in coming years, but whether this will be enough to speed up development remains to be seen."