Can Raytheon Bring Commercial Drones to the Average Joe? 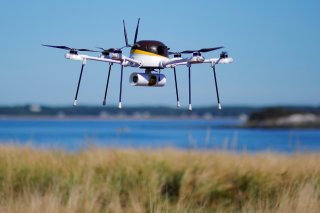 There has been an explosion in the global economic market for small drones and unmanned systems for both commercial and military operations. This technology will soon be delivering pizzas in neighborhoods or supporting police manhunts for dangerous criminals through uneven buildings and narrow streets.

The proliferation of unmanned systems is opening new markets and leading the Federal Aviation Administration (FAA) to explore emerging technologies capable of enabling large numbers of small drones to operate in close proximity without crashing into each other, nearby buildings, or piloted aircraft. The FAA’s air traffic safety management approach is evolving to keep pace with market demands, and the agency is working with the industry to develop infrastructure.

The “FAA will evolve from the current concepts and … will have a lot fewer niche players. You have several, which is what we have today, and it will evolve into something that is a lot more integrated. We are developing what we call an end-to-end solution,” Kip Spurio, technology director for air traffic systems at Raytheon Intelligence & Space, told the National Interest in an interview. “We’re trying to figure out what the market for this is, and what it is going to be. Right now, there is a lot of churn in the market,” Spurio added.

Raytheon Intelligence & Space, which currently engineers many air traffic control technologies throughout the country, is working with the FAA and its industry partners to architect a new technological apparatus sufficient to enable deconflicted, high-volume drone flights for commercial purposes.

“An end-to-end system to allow beyond visual line of sight for small drones is going to unlock the economic potential of the small drone market for the benefit of everyone, from the policemen, firemen and firefighters, to you and me, who want our package delivered the next day. There's just a huge market out there that's waiting to be unleashed,” Spurio said.

Given the market growth in the industry of small drones, the need for coordination and integrated flight plans was identified several years ago in an MIT Technology Review article titled “Air Traffic Control for Drones.” Anticipating the growing number of markets where low-flying drones are likely to be in demand, the essay points out that the FAA did not have standards and rules to govern the use of commercial robotic aircraft

“The U.S. Federal Aviation Administration has yet to propose rules to govern the use of commercial robotic aircraft in U.S. skies. But it predicts that 7,500 unmanned craft weighing 55 pounds (25 kilograms) or less will be operating in the U.S. by 2018. There is strong interest from agriculture, mining, and infrastructure companies in using drones for tasks like inspecting crops or gathering geospatial data,” the paper states.