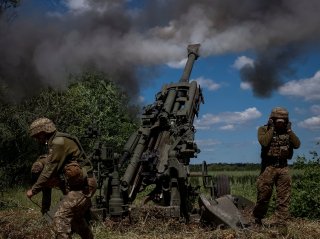 Russian occupation officials in Kherson said they are forming “territorial defense units” as Ukrainian forces press on with a counteroffensive to recapture the key southern region.

"For all men who wish to stay in Kherson, despite the increased security threat due to the actions of Ukrainian nationalists, an opportunity has been created to join the city's territorial defense units," the Russian-installed Kherson regional administration wrote Monday on the Telegram messaging platform.

Russian-aligned Kherson regional governor Kirill Stremousov insisted on Sunday that Russian forces were able to halt Ukrainian advances in the south. "As of the evening of October 23, 2022, the situation in the Kherson direction is stable. Despite the Nazis’ attempts at breaking through into the Kherson Region’s territory, our troops are rebuffing all attacks," he wrote on Telegram, according to Russian state news outlet TASS. "The situation is stable. We are repelling attacks of Ukrainian Nazis. Everything will be all right," he added. It was reported earlier in October that Ukrainian forces captured several villages on the region’s outskirts. There is no verified information to corroborate Ukraine’s current progress on the Kherson front.

Stremeusov alleged that as many as 200 Ukrainian servicemen have been killed per day during the counteroffensive. "All those wishing to come to the Kherson Region today, as practice has shown, are trying to unsuccessfully penetrate the lines that are there,” he said. The claims of Russian and Russian-aligned officials regarding Ukraine’s battlefield performance in the Kherson region have not been verified.

The southern regional capital of Kherson was captured by Russian forces in the early stages of the Russia-Ukraine War. Kherson was among the four Ukrainian regions—also including Donetsk, Luhansk, and Zaporizhzhia—annexed by Russia in late September following a series of referendums denounced by Kyiv and Western countries as illegal and illegitimate.

Local Russian-appointed authorities announced plans earlier this month to evacuate as many as 60,000 civilians from the Kherson region. Stremousov reaffirmed the evacuation decision on Sunday:  "Terror attacks are likely to be continued in the right-bank areas of the Kherson Region. So, we strongly recommend all Kherson residents leave these areas," he wrote on his Telegram channel, according to TASS.

Kyrylo Budanov, the head of Ukrainian military intelligence (GUR), told Ukrainian media that Russia is creating the “illusion” of a retreat from Kherson whilst simultaneously moving in fresh military resources to defend the city.  “They create the illusion that everything is gone. And at the same time, on the contrary, they bring new military units there and prepare the streets of the city for defense,” he said, according to The Hill. Budanov said he expects Ukraine to recapture Kherson by the end of the year.