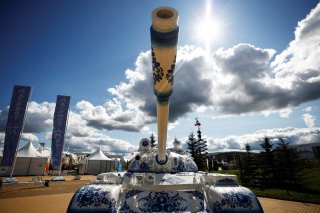 This year's edition of ARMY, scheduled for August 22-28, will be held at its traditional Patriot Expo Center venue in the broader Moscow region. ARMY is Russia's largest and most internationally renowned annual defense exhibition, serving as a prime platform for Russian defense manufacturers to showcase their offerings to foreign observers. According to the event's promotional materials, approximately 1,500 Russian and foreign companies and organizations will present over 28,000 exhibits, with over 150 foreign delegates in attendance.

Kalashnikov Group, an affiliate of Russian defense giant Rostec, is set to present its S-8L guided missile, a “semi-active homing head can be used by various carriers, including all types of helicopters or aircraft, as well as UAVs.” Kalashnikov added that the 80mm missile can be launched from helicopters and certain types of aircraft, and is designed to be used against stationary and moving ground targets alike. Kalashnikov also unveiled the PPK-20, a submachine gun optimized for pilots, noting that the weapon completed state trials and is awaiting a final approval decision from the Russian Defense Ministry. Rostec announced that it is working on an upgraded Planshet-M-IR artillery fire control system, which the company says will offer expanded opportunities for integration with unmanned aerial vehicles (UAVs). The Kolomna design bureau presented its Izdeliye 305E surface-to-air missile, featuring a 25kg high-explosive fragmentation warhead. The 305E is designed for compatibility with Russia’s latest Mi-28NM and Ka-52M combat helicopters.

Alexander Mikheyev, chief of Rosoboronexport (Russia's state defense export agency), told reporters that Russian manufacturers expect to sign over ten export contracts over the course of ARMY 2021. "Rosoboronexport plans to hold more than seventy negotiations with our foreign partners at Army 2021 and sign more than ten contract documents," he said. Mikheyev noted that these orders will significantly boost the company's order book, which currently sits at over $52 billion.

There is no shortage of high-end military hardware that the Kremlin hopes to sell at this year's exhibition, including the T-14 Armata fourth-generation main battle tank (MBT), the T-90MS MBT, the export version of the Su-57 fifth-generation fighter, and the Antey-4000 long-range missile system. In addition to the T-14 tank, Russian officials say Moscow is looking to more actively promote other hardware based on the next-generation Armata Universal Combat Platform, which also includes the T-15 heavy infantry fighting vehicle (IFV) and T-16 armored recovery vehicle.

"Rosoboronexport views the Army forum as the main platform that offers the opportunity to demonstrate the widest range of Russian products for all services and branches of the armed forces, as well as equipment for special forces and police units to foreign customers," Mikheyev added.

The full extent of these prospective contracts is yet to be unveiled, but early confirmation of several export deals has already emerged. Rosoboronexport revealed earlier today that it is in the final stages of “formalizing” a contract with Turkey for an additional shipment of S-400 missile defense systems. Also on Monday, Director of the Federal Service for Military-Technical Cooperation Dmitry Shugayev said that Russia has received “several requests from foreign customers” for modernized Taifun-K armored vehicles and Kornet-EM anti-tank guided missile (ATGM) systems.