Can South Korea Build an ‘Iron Dome’ to Protect Against North Korean Artillery? 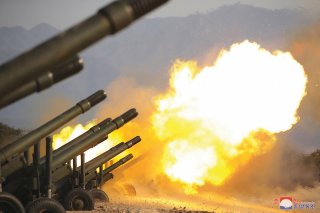 Just a month prior, Israeli Iron Dome batteries allegedly shot down 90 percent of the roughly 1,500 unguided rockets fired by Hamas that were bound for populated areas of Israel, out of a total of 4,300 that were launched.

Yet a Korean Iron Dome system might easily face 4,300 projectiles in just one hour should North Korea attack the South—and fewer of those projectiles would go wildly off target.

Just across the demilitarized zone thirty miles away, the Korean People’s Army has deployed hundreds of long-range artillery systems into fortified positions with which Pyongyang has repeatedly threatened to turn the Seoul metropolitan area, home to over twenty-five million people, into a “sea of fire” should there ever be renewed conflict.

The KPA’s arsenal notably include an estimated five hundred 170-millimeter Koksan self-propelled guns that can reach the northwestern districts of Seoul, and around 200 large multiple-launch rocket systems (MLRSs) ready to launch rapid-fire volleys of 240-millimeter and 300-millimeter rockets at targets up to 40 and 120 miles away.

The long-range artillery systems are a lower-tech but higher volume threat than North Korea’s hi-arcing and potentially nuclear-armed ballistic missiles, which South Korea currently defends against with a mixture of Patriot, KM-SAM, and THAAD missiles.

A study published by Nautilus Institute in 2012 concluded that the threat of the artillery barrage was over-hyped, but nonetheless estimated that just the initial volley of fire from the above weapons would kill roughly 2,800 people if focused on military targets, or 29,661 if focused on civilian targets.

In his announcement, Wook acknowledged that the Korean system would be designed for a more challenging scenario than the Israeli Iron Dome:

Some parts of the system will bear similarities (to the Israeli Iron Dome) but what we are going to build is designed to intercept long-range artillery pieces by North Korea, which requires a higher level of technologies given the current security situation.

The Korean Iron Dome would also be effective against short-range missiles and drones.

Korea’s Defense Acquisition Program Administration (DAPA) has noted that the counter-artillery system is expected to complete development by 2035, though potentially “development of advanced core technologies” may be able to shorten the time frame by two years.

South Korean interest in the Iron Dome first rose in 2010 after North Korean shelling targeting Yeongpyeong Island killed four people. Although a committee concluded Iron Dome in its current form would be inadequate, Seoul nonetheless unsuccessfully sought to acquire Iron Dome tech from Israel in exchange for a sale of Korea’s domestically built jet trainers. That didn’t happen, but study of a domestic Iron Dome-style solution was on the agenda of the 2020 National Defense Heavy Fire Plan, culminating in the June 2021 announcement.

The dilemma remains that the Korean People’s Army has many more artillery shells and long-range rockets than Hamas or Hezbollah do, and that South Korea must defend far larger and more densely populated urban areas.

Israel can afford to expend a $40,000 Tamir missile to kill a crude $300 rocket assembled in a garage because of Hamas’s limited resources—and even then, that offense/defense cost ratio is troublesome. But though South Korea doesn’t lack for money, the volume of fire the KPA can generate is many times greater. And $40,000 is a very low price of surface-to-air missile!

Wook did mention they would seek to “minimize costs”, which might allude to the cost-per-shot issue. He also defined the system’s role as “countering enemies’ long-range artillery threats so as to protect core facilities and military and security infrastructure.”

That doesn’t sound like a broad commitment to protecting population centers, but rather positioning batteries to protect key assets/facilities including missile defense radars, airbases, power plants, the presidential Blue House, and command-and-control facilities.

To be fair, it’s unclear whether North Korea would follow through on threats to concentrate fire on civilian areas, because it would actually be a pretty terrible tactical decision as well as an atrocity. It would be far more effective to direct fire at military targets, especially considering the attrition North Korean artillery units would swiftly incur from South Korean and U.S. counter-battery fire. (The Nautilus study estimated North Korea’s long-range artillery units would mostly be wiped out after a week of sustained fighting.)

Wook also suggested South Korean firms would develop their Iron Dome-equivalent indigenously from the ground up. However, it’s still possible some technology transfers with Israel may be arranged as South Korea already uses Israeli Green Pine air defense radars. However, the U.S. Army found itself unable to integrate Iron Dome into its air defense networks because manufacturer Rafael denied access to the source code.

Still, the original Iron Dome could potentially be introduced to the Korean Peninsula via the U.S. Army, which activated two batteries in November 2020. One of the batteries might be deployed to South Korea to protect the THAAD ballistic missile defense system from rocket artillery threats.

Over the past two decades, South Korea has steadily developed indigenous models of one kind of hi-tech military system after another, from submarines to jet fighters, aircraft carriers and surface-to-air missiles. So an indigenous Iron Dome seems feasible, particularly if it can be slotted in as a new low-altitude layer of the existing Korean Air-Missile Defense system.

The question remains just how broadly South Korea will attempt to stretch out its Iron Dome given the higher volume threat posed by North Korea’s artillery arm. If the public comes to expect an impenetrable artillery shield, then there is a risk that they will be disappointed. However, a Korean anti-rocket system could protect critical military infrastructure, and if frugally deployed to protect population centers too, could potentially mitigate the loss of civilian life too.