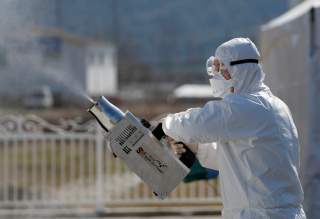 As of March 2, South Korea's infections stood at 4,300 — the highest outside of China and up dramatically from 31 under two weeks before. Currently, manufacturing inside South Korea has remained largely undisrupted, but the possibility that the outbreak could force shutdowns in the current epicenter or spread and spike in key economic hubs such as Busan, Ulsan and Seoul raises the risk of supply chain disruptions that could ripple through the regional and global economy — possibly disrupting or delaying semiconductor and automotive exports.

The immediate concern within South Korea is to contain the spread of the virus and to avoid major disruptions to the economy. Following a mass spread at a large church, the eastern city of Daegu has become the epicenter of COVID-19 in South Korea, and now accounts for the vast majority of cases there and in neighboring North Gyeongsang province. South Korea's robust public health infrastructure and proactive approach to monitoring and tracing the outbreak have so far succeeded in preventing massive upticks in other regions and further hurting the economies of impacted regions, even as the infection count has risen overall.

The virus epicenter is South Korea's "rust belt," where heavy industry has long been concentrated. Daegu and North Gyeongsang boast over 20 percent of automotive parts production in South Korea. Already hurting from COVID-19 related supply chain disruptions in China, South Korean auto parts manufacturers now face the risk of disruption to their production lines domestically. On top of this, demand for automobiles in China is set to decline in 2020, and already there are projections for a 20 percent drop for 2020 auto sales in South Korea itself due to dampened consumer demand around the COVID-19 outbreak.

In South Korea, the COVID-19 outbreak also risks far greater economic disruptions if it spreads farther in the adjacent Southeastern Maritime Industrial Region, which encompasses the cities of Busan, Ulsan and parts of South Gyeongsang province. A Hyundai motor plant had to shut down briefly in Ulsan, although elsewhere production is largely continuing as normal. A spread to Seoul would present even graver risks to economic growth and continuity given its essential role in the South Korean economy, as it would shut down a wider variety of sectors and impact more of the labor force.

South Korea's government has moved quickly to try to offset the economic damage wrought by COVID-19. Already, South Korea's economy was facing major headwinds given sluggish global demand overall, a pre-virus cyclical slowdown in China as well as challenges for the critical semiconductor sector given low prices and a trade war with Japan. South Korea had been looking ahead to something of an economic rebound in 2020 with the quieting of the U.S.-China trade war, projections of a semiconductor price rebound and the de-escalation of Japan tensions.

The COVID-19 outbreak, however, has darkened this picture. Projections for South Korean GDP growth in 2020 stood at 2.3 at the start of the year, but now the central bank projects that this will drop to 2.1 percent due to the virus, only slightly up from the likely 1.9 percent GDP growth of 2019. Much of the economic fallout will be felt by smaller enterprises unable to muster the resources needed to weather the crisis. To offset this impact, South Korea's government has spent $3.3 billion and announced plans for $16 billion in emergency spending to support businesses hurt by the outbreak, and pledged to push for another $5 billion in supplementary budget spending in March. The central bank, for its part, has expanded its special loans program by $4.1 billion to boost liquidity.

Moon's handling of COVID-19 is already under the microscope, much like Chinese President Xi Jinping and Japanese Prime Minister Shinzo Abe. Moon's approval rating dropped 5.3 percent between mid-January and late February, hitting 44.7 percent — its lowest level since November. A petition calling for Moon's impeachment for his COVID-19 management has garnered more than 1.2 million signatures.

Such a groundswell of disapproval of Moon's handling of the crisis does not pose an immediate threat to his tenure given that such petitions are nonbinding, though it may portend political setbacks in the coming months. On April 15, Moon's progressive political camp will defend its position in parliament in elections that will put all 300 seats up for grabs. The conservative parties have banded together into the new United Future Party, hoping to unite the right-wing portion of South Korea's sharply divided political scene. Moon may lose less ground than the outpouring of criticism suggests. This is because both Daegu and the neighboring provinces of North and South Gyeongsang were conservative bastions in the 2017 presidential election, meaning the areas feeling the greatest impact were unlikely to have turned out for the progressives. If the outbreak continues, however, and spreads beyond these areas, Moon will certainly face further political headwinds.

A strong conservative win at the polls could see Moon reduced to lame-duck status in the final two years of his term. The progressives are shy of a majority, forcing them to seek allies from the center. Further erosion of this position would make it difficult for Moon to pursue his hoped-for outreach to North Korea, which is already hamstrung by Washington-Pyongyang acrimony, as well as by his broader justice department and economic reforms agenda. Moon's COVID-19 policies have come under particular scrutiny given his failure to impose a blanket ban on Chinese travelers. This spotlight on Moon's China policies could strain his attempts to reach out to China amid acrimony with Japan and stagnation in the U.S.-North Korea dynamic. A South Korean government with stronger conservative voices would also see a push for a closer defense alignment with the United States, increasing pressure to resolve thorny defense cost-sharing talks with the United States and work more closely to counter China's rise.

Ultimately, the next phase of South Korea's COVID-19 outbreak will be critical in terms of its domestic ramifications. South Korea's proactive focus on testing and management may mean it can stem the spread of the disease, confining its most dire effects to the current epicenter — though this will still have a sharp, if short-term, economic impact due to containment efforts. A sustained or escalated outbreak will further damage South Korea's economy — and the spread of the virus across the globe could reduce demand in key Western consumer markets of the highly export-oriented power.

In South Korea, COVID-19 Burdens an Already Strained Economy is republished with the permission of Stratfor Worldview, a geopolitical intelligence and advisory firm.