Can Stealth Beat Stealth? Last Year F-22s Went up Against F-35 and the Results Were Stunning. 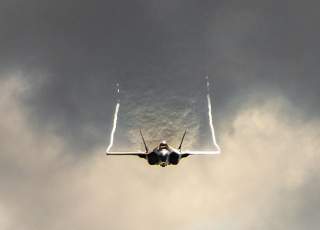 “Every training opportunity that we have betters our readiness for any potential adversary of the future,” Hauck said at the Orland air base, already home to six of Norway’s expected 52 F-35s.

Two F-22s from the 95th Fighter Squadron flew to Orland Air Base, Norway, Aug. 15, for a one-day exercise with Norwegian F-35s.

The two U.S. F-22s are among 13 in Europe for a series of short-term deployments in places such as Greece and Poland, with further training missions planned in undisclosed locations in coming days.

As reported by Reuters, Colonel Leslie Hauck, chief of the fifth generation integration division at the U.S. Air Force’s headquarters in Europe, said that even if the Norwegian deployment lasted just one day it will lay the groundwork for NATO allies as they work to integrate their stealth warfare capabilities.

Growing numbers of Lockheed Martin F-35s are arriving in Europe as the world’s most advanced warplane and most expensive weapons program matures following a raft of cost increases and technical challenges in its early years.

“Every training opportunity that we have betters our readiness for any potential adversary of the future,” Hauck said at the Orland air base, already home to six of Norway’s expected 52 F-35s.

Hauck leads a new office at Ramstein Air Base in southwestern Germany, that is working to ensure a smooth transition for some 40 F-35s due to be on site in Europe by year-end. The first U.S. F-35s are set to arrive in 2021.

Next month, a group of senior officials from the U.S. and seven other F-35 operator countries – Norway, Denmark, Italy, Turkey, Israel, Britain and the Netherlands – will meet to compare notes on the new warplane, which was first used in combat by Israel in May.

Actually, the U.S. already has more than 150 of the aircraft, whose sensors pilots say give them the most extensive overview about a battlefield of any combat jet available.

Royal Norwegian Air Force Major Morten Hanche, who piloted one of the Norwegian F-35s, said the mock fight with the F-22s was great practice, especially since the F-35s generally surprise and overpower other non-stealthy aircraft.

He declined to name the winning aircraft, saying only: “The F-22 is a very formidable opponent.”

A claim confirmed by Jeffrey Parker, former U.S. Air Force (USAF) fighter pilot and CEO of Airborne Tactical Advantage Company (ATAC), who said last year that “The Raptor is such an uneven fight, that if you send out two Raptors against anything else, there’s no challenge, no work for the pilots to do. For a ‘two-ship’ they want 12 bandits.”

We are looking forward to the outcome of the mock dogfights.