Can Syria Survive Another Tragedy? 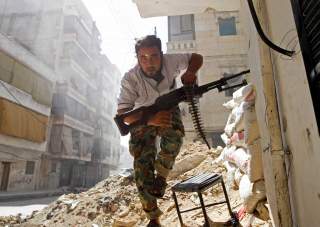 On February 2, a little known anniversary passed with barely a remark. On that day in 1982, Syrian forces entered the town of Hama and massacred thousands, as many as 20,000 men, women and children. When I visited almost a decade later, the town was still in ruins. So it should come as no surprise that 38 years later, as Russian-backed Syrian forces try to take Idlib Province, there’s not much interest in another massacre in Syria. What’s a few more bodies on top of the half a million piled high, a monument to the Assad family, Ayatollah Khamenei, Vladimir Putin and Hezbollah. But Idlib deserves a second glance, if not for the human tragedy, for the potential geostrategic fireworks.

As I write, Syrian forces backed by their Russian and Iranian overlords are pounding Idlib Province in a desperate attempt to take this last remaining slice of Syria. In January, hundreds of thousands of Syrians were forced from their homes. Millions more are poised to flee the brutal onslaught, among them plenty of nasty al Qaeda affiliated jihadis. As the Washington Post noted in an editorial this morning,

A new flood of refugees into Turkey could easily lead to another destabilizing exodus to Europe. International terrorists now bottled up in the province, including from the Islamic State, could disperse, too. That’s not to speak of the horrific humanitarian crisis the new offensive may trigger.

Who’s on the front lines of this nightmare? Yep, you guessed it: The Turks. With only a little bit of schadenfreude, let’s note that Turkish President Erdogan’s new Russian friends (love their NATO-killing S-400s!) are trying to shake the beautiful Putin-Erdogan friendship, and killing a few Turkish troops along the way. They’re also putting Erdogan’s government to the test, threatening to pile hundreds of thousands more fleeing Syrians onto the three plus million already living in Turkey. Where would they go from there? Europe, of course. Remember the million refugees flooding through Greece into the EU? Remember what that wrought? What’s the US response to this festering disaster? To blame the Russians.  Strong words, yes. Sanction? Nah. To hit Iranian or Hezbollah targets in Syria? Nah.

To be clear, this is an opportunity for the Trump administration to pressure two of its most persistent nemeses, the Russians and the Iranians. It’s an opportunity to show the Turks just what kind of allies they have chosen in Moscow, and why they would be wiser to stick with their old NATO pals. Least of all in this day and age, it’s a chance to do the right thing for those suffering in Idlib.  As so often happens, both American strategic and moral interests align in Syria. And as has always happened, we’ve chosen to ignore those interests in favor of pointless rhetoric.

PS If you want a poignant sense of life in Idlib, see today’s NYT op-ed by Waad el Kateab, “We Are Left to Face Death Alone.”

Learn more: Bloody Sunday in Syria | 10 reasons why Trump is wrong to support Turkey | Abu Bakr al-Baghdadi is dead (but his legacy lives on)

This story was first published on AEI.