Can These Chinese Helicopters Really Do As Much As the F-35B? 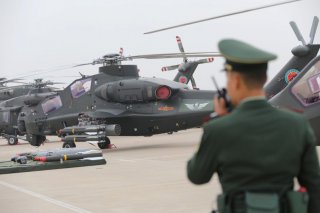 A Chinese newspaper is claiming that having multiple helicopters onboard its new Type 075 amphibious assault ships compensate for not having an F-35B-like aircraft for those ships.

This assertion, contained in a news report from the Chinese government-backed Global Times, says PLA Z-20 and Z-8 helicopters, along with deck-launched drones, create a combat capability analogous or equivalent to the F-35B, now launched from U.S. amphibious assault ships. China’s now operational first-of-its-kind Type 075 amphibious assault ship, the first of which is called the Hainan, is a ship intended to help transport heavy armor from ship to shore for maritime attacks. The U.S. Navy’s new Ship-to-Shore connector is well known for its ability to break new ground and move Abrams tanks ashore for amphibious attacks.

The idea that several different kinds of assault, reconnaissance, and transport helicopters, as well as drones, could offer amphibious assault air attack support seems to be somewhat of an open question or debatable claim. Chinese helicopters, such as the Z-8 and Z-20, are likely to introduce an ability to conduct attack and transport missions from ship to shore. Yet they almost certainly do not have the speed, range, aerial maneuverability, or drone-like surveillance capacity of a U.S. Marine Corps F-35B.  The Z-8, for instance, can carry small vehicles ashore and provide some degree of aerial fire support in the event of an amphibious landing, yet its abilities seem to fall well short of any kind of F-35B-like advantage.  In fact, it may be a stretch to even suggest that Chinese Z-8s or Z-20s even rival an upgraded U.S. MV-22 Osprey in terms of offering combat value-added.

One interesting element of the Type 075 ships, Chinese newspapers write, is that it has a Ship-to-Shore connector-like ability to transport tanks ashore during an amphibious landing. Such an advantage would, however, be quite limited in its ability to have a large impact, given that it would lack any kind of high-speed close air support in any way analogous to the F-35. Speed, maneuverability, and of course proximity to approaching amphibious forces are key attributes of great significance to any kind of amphibious attack. All these things are somewhat unique to the F-35B when it comes to maritime warfare. Nonetheless, operating with this kind of deficit when potentially confronting the F-35, may be one reason why there seems to be a lot of reporting and discussion centered around the possibility that China is fast developing a carrier-launched variant of its J-31 5th-generation stealth fighter.