Can the United Kingdom Manage Not to Anger Both America and China Over Huawei? 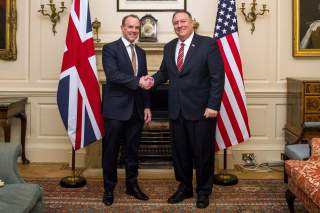 London is attempting to compromise between its trade and security interests with the United States and its ability to compete technologically in the years to come. The British government has decided to grant Chinese telecommunications giant Huawei Technologies a limited role in the development of its 5G network. Despite labeling it a "high-risk vendor" and barring the company from operating near high-risk sites, such as nuclear facilities and military sites, London will allow Huawei to develop the non-core elements of the network.

According to a British government source, London had few alternatives to Huawei, and excluding the company would have set back the development of the United Kingdom's 5G infrastructure by several years and substantially increased associated costs. The decision came despite U.S. pressure on the British government to exclude the company from its 5G development over national security concerns and threats that Washington might limit its intelligence-sharing. However, London reaffirmed that the decision won't affect how the United Kingdom shares sensitive information with its allies.

With this decision, the United Kingdom is attempting to strike a careful balance between U.S. pressure to exclude Huawei in the development of its 5G network and its desire to include a company that can provide the necessary expertise at an affordable price. However, concerns remain over how the United Kingdom intends to enforce the limits it will impose on Huawei and how the company can be prevented from gaining access to sensitive infrastructure and data that can be exploited for industrial espionage and intelligence.

Huawei's role in building out the United Kingdom's 5G network will cast its shadow on London's relationship with the United States. The British government's decision comes just days before the country formally leaves the European Union and as London looks to strengthen its bilateral ties with Washington, primarily by pursuing a post-Brexit trade deal to bind both countries closer together. However, the White House could use the decision as a lever to exert pressure on the British government and urge it to reconsider Huawei's role if it still wishes to pursue a free trade agreement. And while the United States is unlikely to sever all intelligence ties with the United Kingdom, it could consider selective curbs in intelligence sharing.

Finally, the British decision sets the stage for other European countries that will soon announce their plans for whether and how to include Huawei in their 5G network developments. The United Kingdom's way of partially allowing the company to contribute to non-core elements could become a role model for other nations. After all, it's similar to a previous suggestion by the German government to impose additional scrutiny on Huawei without explicitly excluding the company. However, several countries might look toward a U.S. response to London’s decision before moving on the issue.

The White House has accused Huawei of maintaining close ties to the Chinese government that Beijing could exploit, although the company has rejected such linkages. However, the decision of whether to include the Chinese firm remains highly contentious among most EU member states, as some nations fear that excluding Huawei would be a lost opportunity and that their countries would fall behind in the race to adopt 5G and all the technological benefits that it can afford. Finally, some nations remain hesitant to block Huawei over concerns that it would incur a broader political rift with China that could reduce Chinese investments in their countries. The European Union, meanwhile, maintains its official position that Huawei does, in fact, present a security threat, but stopping short of calling for an explicit ban against specific companies.

In Its Huawei Decision, the British Government Eyes a Careful Balancing Act is republished with the permission of Stratfor Worldview, a geopolitical intelligence and advisory firm.