Can the United States and Turkey Avoid a Messy Split? 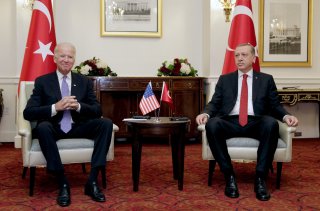 The last decade has seen an unprecedented decline in U.S.-Turkey relations, going from a model of strategic partnership to the level of “so-called allies.” America’s partnership with the Kurdish People's Protection Units (YPG) in northern Syria, Turkey’s relations with radical groups and its purchase of Russian S-400 air defense systems, and democratic backsliding in Turkey are only some of the issues that have harmed the relationship.

On top of that, deep anti-American and anti-Western sentiments that cut across different political cleavages in Turkish politics, revisionism in Turkish foreign policy, and President Recep Tayyip Erdogan’s opportunist understanding of diplomacy have not only undermined both sides’ trust but also the perception of shared values.

Given this grim picture, a transactional relationship comes forward as the only viable option to manage the issues that still necessitate cooperation on both sides. As Washington aims to allocate its resources to great power competition and broaden its alliances, reaching an understanding with Turkey, albeit on a limited basis, has a number of advantages. Moreover, Erdogan’s short-sighted opportunism seems quite suitable for such an interest-based understanding. Yet, the characteristics of U.S.-Turkey relations and their bilateral expectations complicate a transactional turn in relations. Instead of a business-like exchange of interests, policymakers in Washington must be ready to put up a stiff fight for every bit of America’s interests vis-a-vis Ankara.

Transactional relations have mostly been associated with populist authoritarians like former President Donald Trump and Erdogan. Instead of pursuing long-term grand strategies with defined goals and principles, these leaders prefer give-and-take relationships primarily based on short-term economic interests, rendering values, shared goals, or bilateral commitments no longer relevant. In this respect, Turkey’s relationship with Europe is a typical example of such a transactional relationship. Although values and principles played a key role when European Union (EU) membership was a serious goal for Ankara, Turkey-EU ties have evolved into an interest-based relationship in which the sides respect each other’s red lines. Ankara’s systematic human rights violations and Erdogan’s authoritarianism still draw criticism from the European leaders, but Turkey-EU trade, European investments in Turkey, the Turkish diaspora in Europe, geographic proximity, and cooperation on stopping the flow of refugees keep the relations working. In this respect, the economic and social characteristics of the relationship have helped the sides reach an understanding, while the most significant challenge has been a geopolitical conflict in the eastern Mediterranean.

However, U.S.-Turkey relations have different dynamics. First, they rely more on geopolitical calculations and less on economic interests, which makes a trade-off much more difficult, if not impossible. The disagreements over Syria policy, the U.S.-YPG partnership, Turkey’s military operations against the Kurds, and Erdogan’s flirtation with Putin are mostly about core national interests, security perceptions, and grand political strategies. If Turkey maintains its aggressive interventionism and the United States stays in the region, these conflicts will further increase and make bargaining more complicated. Besides, as the problems between Washington and Ankara have increased both quantitatively and qualitatively, a transactional relationship has become more complicated. Although economic sanctions might bring great harm to the weak Turkish economy, they are unlikely to ensure a change in Turkey’s strategic orientation.

The geopolitical and strategic character of U.S.-Turkey relations also complicates the compartmentalization of the relationship. The issues that are more convenient for making trade-offs—Halkbank’s involvement in Iranian sanctions evasion, S-400 and F-16 fighter jet deals, and the incarceration of U.S. citizens in Turkey—are mostly extensions of broader strategic conflicts. The sides consider all these issues to be in the same basket, which makes them all interconnected and thus more difficult to solve. As recently seen, Ankara has brought up the issue of the Kurdistan Workers’ Party and Gulenists as Sweden and Finland pursue NATO membership.

Another difficulty for a transactional relationship is both sides’ expectations of each other. Despite the difficulties in relations, neither Washington nor Ankara seem ready for a split. The Biden administration still expects Turkey to turn away from Russia and return to NATO. “We have an interest in trying to keep Turkey anchored to the West,” Secretary of State Antony Blinken said last year. Indeed, the war in Ukraine has shown that a Turkish “charm offensive” can still be very influential in improving Ankara’s image and turning the tide of its relations with the United States.

In return, Ankara expects its strategic autonomy, regional influence, and global role to be recognized and accepted by the United States. Yet, Ankara still cannot digest America “working around” Turkey’s geopolitical importance by substituting Incirlik Airbase with Greece or partnering with the Kurds in northern Syria. So long as these strategic expectations dominate the nature of U.S.-Turkey relations, it will continue to be difficult to establish a transactional understanding.

Moreover, Erdogan’s hot-tempered and undiplomatic character is a constant threat that can blow up a business-like exchange of interests. Statecraft is useful for establishing an understanding, particularly when values and strategic interests do not align. Yet, acts like beating U.S. citizens during an official visit to Washington or insulting counterparts as “Nazi remnants and fascists” might increase the challenge of reaching a diplomatic tradeoff.

On the other hand, transactional relations are not a completely new phenomenon within the context of U.S.-Turkey relations. The relationship has always had a strong transactional character, particularly after the Cold War. Conflicting values and ideals have never been a serious obstacle between Washington and Ankara. As Cihan Tugal eloquently argued, the United States and other NATO countries have long been accustomed to turning a blind eye to Turkey’s authoritarianism and human rights violations, particularly against the Kurds. Besides, communication channels have always been open in order to keep relations and negotiations functioning. However, despite all that, the relationship has remained dysfunctional for the last few years.

U.S.-Turkey relations are more like an endless, messy divorce in which even trivial matters can cause fights. But at the same time, it is not possible for Washington and Ankara to go completely separate ways either. As the Ukraine crisis has shown once again, Turkey is not a country to be discarded. Turkey will continue to be an attractive option for balancing Russian and Iranian influence in the region. Moreover, thanks to Ankara’s foreign policy activism, Erdogan will do much to draw international attention. Instead, U.S. policymakers must be ready to fight for their interests vis-à-vis Ankara.

In fact, this conflict-ridden relationship is not exclusive to U.S.-Turkey relations. Russia-Turkey relations have had a more positive trend despite the deep geopolitical discord between Ankara and Moscow. Yet, Russia and Turkey have passed through significant crises and conflicts as well, even nearly reaching the point of war. Likewise, President Trump, who one way or another succeeded in establishing a working relationship with Erdogan, did not shy away from confronting the Turkish leader.